From flu to heart attacks, here’s why you get sick in the winter • Earth.com 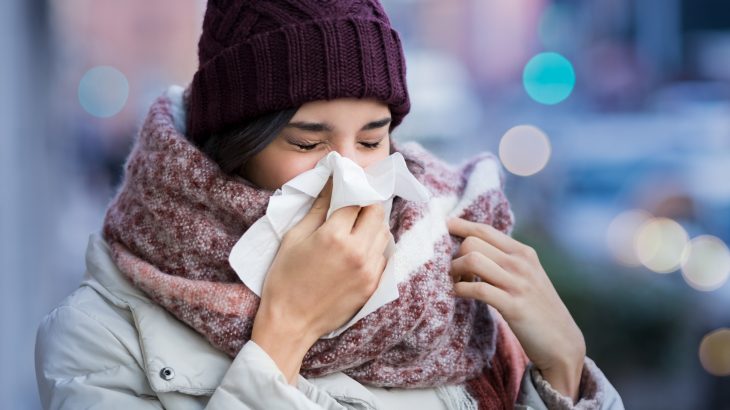 From flu to heart attacks, here’s why you get sick in the winter

Daylight Saving Time has ushered in the start of the coldest, darkest months of the year for many areas of the globe. Fall is on its way out, winter is rolling in, and with it flu season, colds, seasonal affective disorder, and even an increased risk of heart attacks.

During the winter months, when temperatures can dip below zero degrees Fahrenheit in some places, an extra layer may keep out the chill. But here’s why simply covering up isn’t enough to protect against the flu or heart attacks.

What most likely comes to mind when you think about getting sick in winter is flu and colds. Both are viral infections, and so antibiotics won’t be of any help. Antibiotics would only be prescribed for bacterial infections that arose because of a nasty bout of flu or a cold, for example, congestion from a cold could lead to a sinus infection.

You can contract the flu any time of year, but cases are much more common in the fall and winter. The flu is incredibly contagious, which is partly why health care providers are so adamant about getting up to date flu shots.

An adult with the flu can spread the germs within a six feet radius, and you can inhale the flu virus from someone’s cough or sneeze or accidentally touch a contaminated surface. You can also be contagious before symptoms begin and up to seven days after getting sick, according to the Centers for Disease Control.

Around 9.3 million and 49 million people are estimated to get sick every year from influenza, and this has resulted in hundreds of thousands of hospitalizations and thousands of deaths since 2010.

There are a couple of reasons why the flu is far more prevalent in winter than other times of the year, and one major factor is the increased time spent indoors with other people.

As we bunker down for the winter, winterizing homes, sealing up windows and staying indoors as much as possible, we increase the amount of time we spend in close proximity with others and with that comes a higher likelihood of catching the flu from someone who is sick.

Researchers have also hypothesized that the cold weather and lack of sunlight, both common in winter, can compromise the immune system and weaken our natural defenses against infections.

However, one of the biggest reasons behind the flu’s triumphant invasion during the winter months has to do with the virus itself and its preference for cold, dry climates.

In 2007, a study published in the journal PLoS Pathogens revealed for the first time that the flu virus thrives in low humidity, which makes the cold, dry air of winter ideal.

Influenza is largely spread through the air, and the researchers found that winter conditions allow the virus to stay stable for longer.

“We’ve always thought the immune system wasn’t as active during the winter, but that doesn’t really seem to be the case,” said Peter Palese, a co-author of the study in an interview with LiveScience “We found that the flu’s transmission period is much, much longer when temperatures and humidity levels are low.”

Your risk of getting the flu isn’t the only thing that increases in the winter. Recent research has found surprising links to cold weather and heart attacks. Cold weather can increase both your blood pressure and cholesterol which are two major risk factors for heart disease.

Put plainly, cold weather forces your heart to work harder, and for people with cardiovascular disease, the risk of heart attacks is much higher in winter. Cold weather can constrict oxygen flow, and winter sports and even something as simple as shoveling snow puts stress on the heart.

In response to the cold, the body’s blood vessels shrink, which is why it’s especially important to cover up in the winter.

Even the flu increases the risk of heart attacks as a fever can cause your heart to beat faster, and dehydration (also a risk with influenza) reduces blood pressure. As a result, the flu season is a kind of double whammy in terms of risk factors for heart attacks.

Studies have also found that pollution is worse in the winter in many areas of the globe, due to the increased use of fuel for energy and transportation as well the low wind speeds and temperature which create pockets of stagnant air during the winter.

One recent July 2018 study found that in the eastern United States, although overall emissions are decreasing year round, wintertime pollution has stayed consistent despite declines in summertime pollution. This is due to the fact that cold temperatures allow for more pollution particulate exposure.

Those most at risk of winter heart failure are the elderly and people with cardiovascular disease. One study found that heart failure increased by .07 percent for every one degree Celsius decrease in average temperature over the past seven days. Heart failure risk also rose with an increase in atmospheric pressure, according to the same study.

The best thing you can do to guard against these common winter health problems is bundle up and dress appropriately for the weather, and stay up to date with flu shots. It’s also wise to keep outdoor activities to a minimum if you’re at risk for heart failure, and make sure you’re aware of how cold weather and winter pollution impact your cardiovascular health.