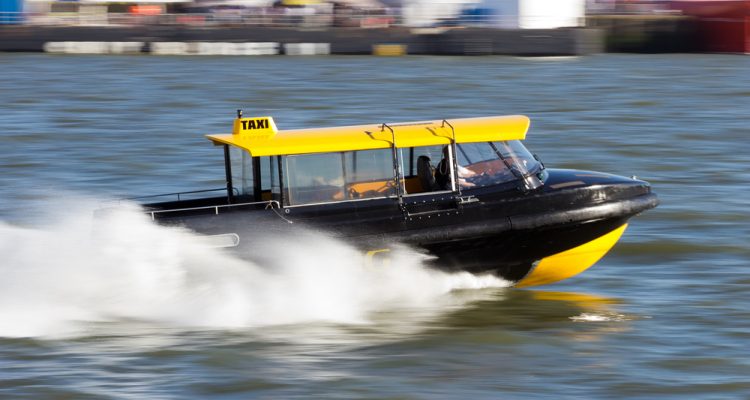 Imagine buzzing across the Hudson River or around the San Francisco Bay on a boat that actually floats above the water. It could happen sooner than you might think. Flying water taxis are now one step closer to becoming a reality now that its investors have received a new round of funding.

Yachtsman Alain Thébault and Swedish windsurfer Anders Bringdal have teamed up to design these “flying water taxis” otherwise known as the Sea Bubble. The unique vehicles will float 2 feet above the water, capable of reaching speeds up to 18 miles per hour.

The team raised $3.6 million for the project last month, and have just announced they are expecting an additional third round of funding. Thébault told Bloomberg that the next installment could be up to 10 times that amount.

Production of the flying water taxis will begin next month, and testing will occur in Paris in the spring. Test vehicles will be able to carry up to 6 passengers at a time.

Thébault told The Telegraph that he envisions SeaBubbles will ultimately be available to order on an app like Uber.

The technology powering SeaBubbles was originally invented by Thébault in 1994 for a sail-powered vessel he called Hydroptere. Instead of floating along the the water like a typical boat, the Hydroptere channels a similar model that planes use to fly, where air passes over the wings and generates lift.

By floating above the water, the Sea Bubble avoids up to 40% of the drag imposed by water flow. Because the boat is electrically powered, it remains very quiet and produces zero emissions.

Trips on the Sea Bubble will cost roughly $12.

“The idea actually came from my daughters after I sailed from LA to Hawaii recently,” Thébault told The Local. “They told me to invent a zero-emission cab because they were sick of seeing the pollution in Paris, London, and the US.”