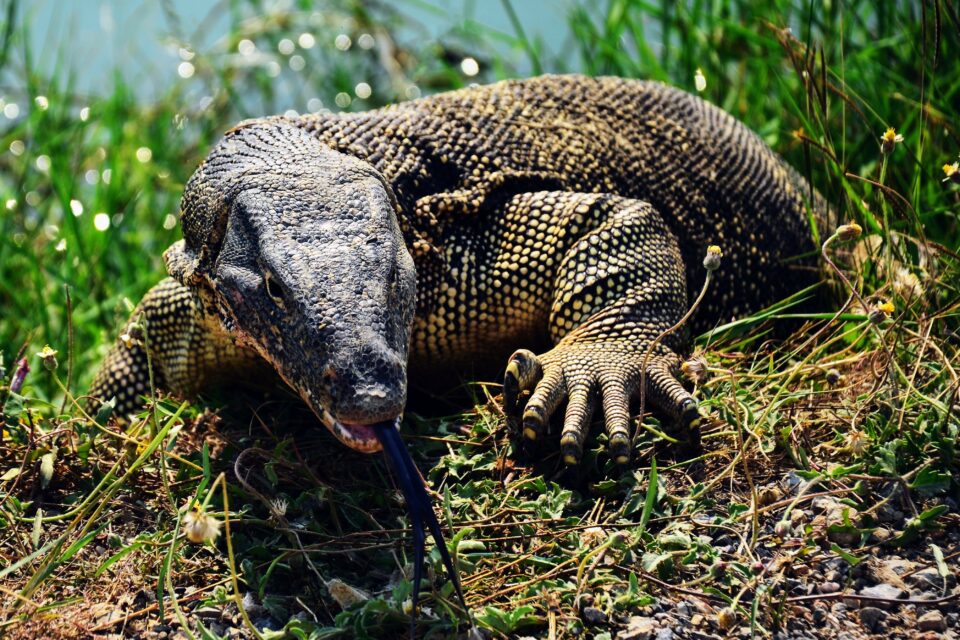 Lizards, snakes and worm lizards all belong to the reptilian order known as the Squamata, and are characterized by having scaly skins. This is the largest and most diverse order of reptiles today, with 10,900 extant species. The evolutionary origin of the group is, however, contentious and not well supported by fossil evidence. There are only a few well-preserved fossil specimens dated to between the late Permian (260 million years ago) and the late Jurassic (150 mya), which is estimated to be the period of origin.

Significantly, there is a fossil gap of approximately 70 million years between the oldest known squamate fossils, and their estimated origin some 240 million years ago. By many standards, this represents of one of the biggest knowledge gaps in vertebrate evolution. However, the discovery of an unusual fossil stored in a cupboard in the Natural History Museum in London has gone some way to filling that gap.

The fossil was identified in a stored museum collection from the 1950s that included specimens from a quarry near Tortworth in Gloucestershire, South West England. It was in among other fossil lizards known as Clevosaurus, and was labelled in a misleading fashion, meaning that it lay hidden in the collection for decades without attracting any attention.

“I first spotted the specimen in a cupboard full of Clevosaurus fossils in the storerooms of the Natural History Museum in London where I am a Scientific Associate. This was a common enough fossil reptile, a close relative of the New Zealand Tuatara that is the only survivor of the group, the Rhynchocephalia, that split from the squamates over 240 million years ago,” explained Dr. David Whiteside of the University of Bristol.

“Our specimen was simply labeled ‘Clevosaurus and one other reptile.’ As we continued to investigate the specimen, we became more and more convinced that [the ‘other reptile’] was actually more closely related to modern day lizards than to the Tuatara group. We made X-ray scans of the fossils at the University, and this enabled us to reconstruct the fossil in three dimensions, and to see all the tiny bones that were hidden inside the rock.”

The researchers used the morphological and anatomical details of the skeleton to identify that the lizard was indeed more closely related to modern squamates than to the ancient tuatara group. They named it Cryptovaranoides microlanius, with the genus name reflecting the fact that it had remained hidden for so long. The species name, microlanius, means ‘small butcher,’ and highlights the fact that its jaws were filled with sharp-edged slicing teeth. Details of the research are published in the journal Science Advances.

Cryptovaranoides has a mixture of primitive and modern features. It is clearly a squamate as it differs from the Rhynchocephalia in the braincase, the neck vertebrae, the shoulder region, the presence of a median upper tooth in the front of the mouth, the way the teeth are set on a shelf in the jaws (rather than fused to the crest of the jaws), and in aspects of the skull architecture, such as the lack of a lower temporal bar. There is only one major primitive feature not found in modern squamates, an opening on one side of the end of the upper arm bone, the humerus, where an artery and nerve pass through.

The new species does have some other, apparently primitive characteristics such as a few rows of teeth on the bones of the roof of the mouth, but experts have observed the same feature in the living European Glass lizard, and many snakes such as Boas and Pythons have multiple rows of large teeth in the same area. Despite this, it is advanced in its braincase, like most living lizards, and the bone connections in the skull suggest that it was flexible.

What is also significant is that this fossil was preserved in rock dated to the Late Triassic period, meaning that Cryptovaranoides was around on Earth some 35 million years earlier than the species previously thought to be the oldest example of modern lizards. The analysis was also aided by up-to-date CT scanning technology, which was not available in the 1950s, when the fossil was first recovered.

“In terms of significance, our fossil shifts the origin and diversification of squamates back from the Middle Jurassic to the Late Triassic,” said study co-author Professor Mike Benton. “This was a time of major restructuring of ecosystems on land, with origins of new plant groups, especially modern-type conifers, as well as new kinds of insects, and some of the first of modern groups such as turtles, crocodilians, dinosaurs, and mammals.”

“Adding the oldest modern squamates then completes the picture. It seems these new plants and animals came on the scene as part of a major rebuilding of life on Earth after the end-Permian mass extinction 252 million years ago, and especially the Carnian Pluvial Episode, 232 million years ago when climates fluctuated between wet and dry and caused great perturbation to life.”

“The name of the new animal, Cryptovaranoides microlanius, reflects the hidden nature of the beast in a drawer but also in its likely lifestyle, living in cracks in the limestone on small islands that existed around Bristol at the time,” said PhD student student Sofia Chambi-Trowell. “The species name, meaning ‘small butcher,’ refers to its jaws that were filled with sharp-edged slicing teeth and it would have preyed on arthropods and small vertebrates.”

“This is a very special fossil and likely to become one of the most important found in the last few decades. It is fortunate to be held in a National Collection, in this case the Natural History Museum, London,” said Dr. Whiteside. “We would like to thank the late Pamela L. Robinson who recovered the fossils from the quarry and did a lot of preparation work on the type specimen and associated bones. It was such a pity she did not have access to CT scanning technology to help her observe all the detail of the specimen.”