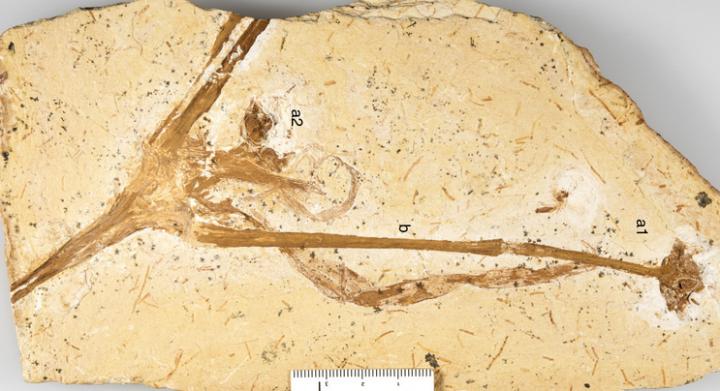 A stone quarry in Brazil unearthed a breathtaking find: a fossilized lily that grew about 115 million years ago, complete with roots and a flower.

The fossil is so well-preserved it still has individual cells. Researchers believe it grew alongside a freshwater lake near the area that is now Crato, Brazil.

Plants first evolved around 520 million years ago, with angiosperms – flowering plants – first cropping up 140 million years ago. That means the fossilized lily would have been from one of the first species of flowers to evolve – dubbed Cratolirion bognerianum by researchers.

“It is probable that flowering plants originated in the tropics, but only very few fossils have been described to date,” said Dr. Clement Coiffard of the Museum für Naturkunde in Berlin, who discovered the fossil in the museum’s research collections.

The fossilized lily is more than 15 inches long, and features narrow, parallel-veined leaves, triple flowers and fibrous roots. However, the stone that encases the fossil has iron oxides, making examining the ancient flower difficult.

Coiffard teamed up with Dr. Nikolay Kardjilov, an expert in 3-D analysis of X-ray imaging and neutrons. The pair ran numerous scans, including colorized CT scans, to analyze the fossil without disturbing it any more than necessary.

Cratolirion bognerianum is not the first ancient plant recovered from the Crato area, though it’s among the oldest. The long-gone ancient lake was home to a diverse selection of plant life – plants that scientists don’t normally have much information about, due to poor preservation in the tropics.

“The Crato plattenkalk limestone offers a unique window into the Early Cretaceous vegetation of the tropics and has already yielded monocot fossils,” Coiffard, Kardjilov and their team wrote in a paper describing the fossilized lily. Their research has been published in the journal Nature Plants.