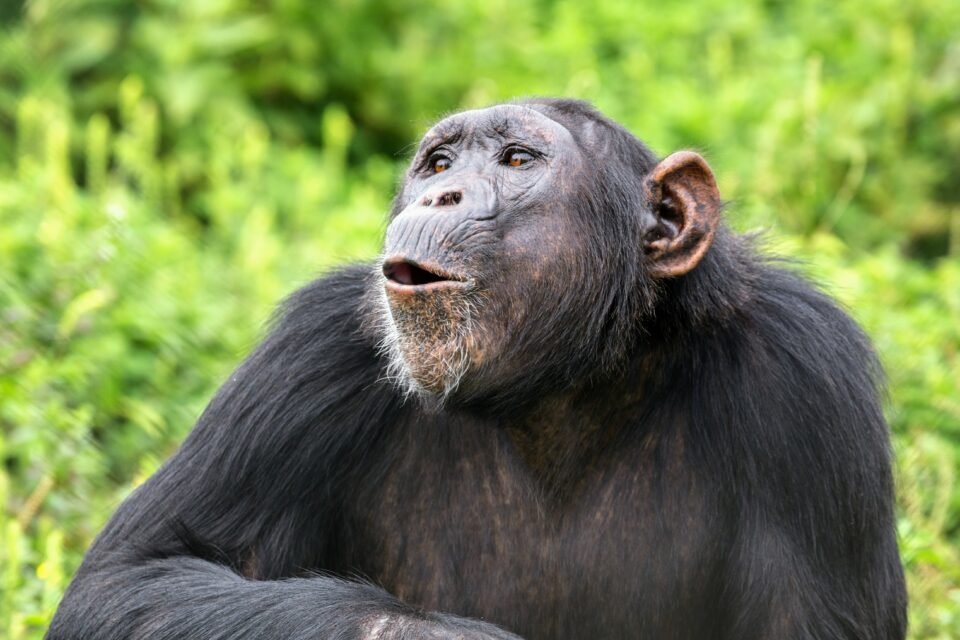 After years of field and laboratory work, and the collection and analysis of thousands of samples of feces, scientists have been able to develop a detailed reconstruction of chimpanzee (Pan troglodites) population structure and historical patterns of isolation, migration and connection across the species’ range. Apart from giving support to the existence of four separate subspecies of chimps, the method can also be used to identify any illegally traded, confiscated or orphaned chimp to its place of origin, within about 100 kilometers.

Study first author Claudia Fontsere is an expert at the Institute of Evolutionary Biology (IBE), a joint center of CSIC and Universitat Pompeu Fabra (UPF) in Barcelona, Spain.

“Chimpanzees are an endangered species with massive population declines in recent years,” said Fontsere. “Our efforts to describe the current genomic diversity of this species are an attempt to provide a fine-scale map of connectivity between populations that can be of service to conservationists as a baseline and guide to build upon their conservation efforts.”

The research was conducted under the auspices of the Pan African Program (PanAf) that coordinated the sampling of thousands of chimpanzee fecal samples at 48 locations across the species’ range. This was followed by years of effort to develop successful methods to retrieve and enrich the portions of the host DNA (hDNA) of interest, and then to analyze and compare the results for the 828 individual chimps involved.

Previously, only 59 whole chimpanzee genomes had been sequenced and this gave limited information about geographical differences. And, although large datasets from thousands of geo-referenced fecal samples do exist, the genetic analysis used on these samples only focused on very small fragments of the entire genome, such as single nucleotide polymorphisms on a few autosomal, sex-linked, or mtDNA markers.

In the current study, the researchers focused on the entire genetic sequence of chromosome 21, which is the smallest contiguous nuclear sequence in the chimpanzee genome. Using this chromosome provided a wealth of genomic sequence data that was helpful for inferring chimpanzee population structure and relationships between subspecies. Since the fossil record and the existence of ancient DNA are limited for chimpanzees, the analysis of population genetics for this species is restricted to the use of modern DNA.

“Since we are using sequencing of a whole chromosome with thousands of independent markers, compared to few microsatellite markers, we have a much broader view of the genome [that] is needed to refine and describe the very complex evolutionary history of chimpanzees,” said study co-lead author Tomas Marques-Bonet, principal investigator from the Institute of Evolutionary Biology (IBE).

“Impressively, we are doing it with non-invasive samples, which, in a sense, are the best of all worlds – a valuable source of genomic DNA but collected in a way that animals never need to be contacted or disturbed beyond researchers existing in their habitat.”

The findings support the existence of four distinct subspecies of chimpanzees. These subspecies are often geographically separated by the presence of large rivers, such as the Ubangi River, which would have been a barrier to gene transfer most of the time, but not always. During peak glacial periods, lower river levels may have allowed migrations between the groups, thus introducing new genetic variations.

“We were able to show, using different analyses that look at very old and more recent variation, that the history of chimpanzees is complex, much like that of our own species,” said co-lead author Mimi Arandjelovic, from the Max Planck Institute for Evolutionary Anthropology.

“Chimpanzee subspecies were indeed separated in the past but have since also experienced genetic exchange between populations. This nicely explains why different studies aiming at reconstructing different ancestral periods have come to different conclusions about the evolutionary history of chimpanzees.”

By using genetic sequences on chromosome 21, the researchers were able to discover many new variations in the genes, in comparison with previously published chimpanzee whole genomes. They hypothesize that these rare variations likely emerged recently (during the past few hundreds to thousands of years), and are probably specific to particular geographic locations. The experts thus used the rare variant data from 434 samples of sufficient quality, in 38 locations, to develop a strategy to deduce the genetic origin of fecal samples.

“Just by our sampling method, we have discovered around 50 percent more, and new, genetic variants on chromosome 21 than previous studies,” said Fontsere. “Our dataset has been key in understanding recent and past gene flow between populations where previous sampling gaps impeded their study. Also, it has allowed us to describe if populations have been isolated recently or whether there was a historical event that did so. By characterizing the genomic singularities of each community or population, we also created a map that links genomic information to geographic location so that we were able to devise a strategy to infer the geographic location of chimpanzee individuals.”

This catalog of genomic diversity in wild chimp populations has important conservation applications. It can help ensure that confiscated chimpanzees from the illegal pet trade are placed into sanctuaries in their countries of origin, as mandated by international standards. In addition, the sequencing of confiscated chimps or wildlife products, such as trophies or bushmeat, can identify hotspots of poaching to which the relevant authorities can be directed. This is particularly useful when dealing with endangered species that need to be protected urgently.

The authors of the study state that retrieving useful hDNA from fecal samples is challenging for many reasons. The samples usually contain only small amounts of rather poor quality DNA, and can be contaminated with the DNA from dietary organisms. In this study, some 100 fecal samples contained DNA that was very similar to that of chimpanzees, but that came from other primate species. The researchers concluded that this was due either to chimpanzees including these primate species in their diets, or due to the erroneous collection of the feces of other primate species by the field workers.

Despite these challenges, the use of feces has the advantage that many samples may be collected with negligible disturbance or interference to the animals. The researchers now feel that the methods they’ve developed for chimpanzees can be used with other great apes and primates. Their findings in chimpanzees confirm that fecal samples, although more complex than blood samples, are a good source of host DNA for any species

The PanAf continues to analyze data collected over eight years from 18 countries across Africa, at over 40 temporary and long-term research and conservation sites. The goal is to understand the evolutionary and ecological drivers of chimpanzee cultural and behavioral diversity.

The study is published in the journal Cell Genomics.