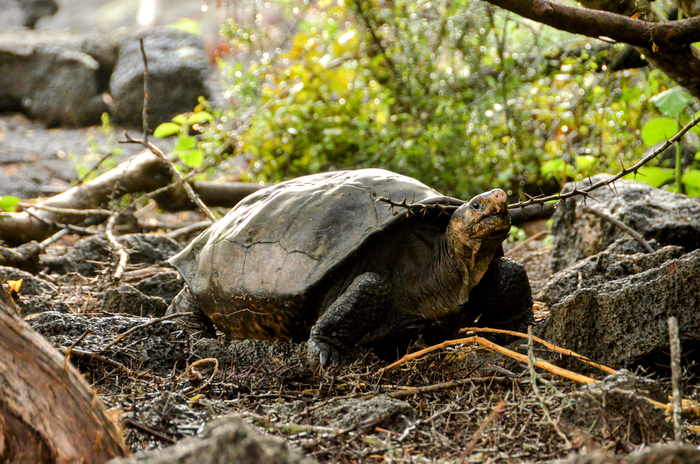 By sequencing the genome of both this tortoise and the museum specimen discovered over a century ago, and comparing them to the other 13 species of Galápagos giant tortoises, the experts have shown that the two known Fernandina tortoises are members of the same species, which is genetically distinct from all the others.

“For many years it was thought that the original specimen collected in 1906 had been transplanted to the island, as it was the only one of its kind,” said Peter Grant, an emeritus professor of Ecology and Evolutionary Biology at Princeton. “It now seems to be one of a very few that were alive a century ago.”

When Fernanda was discovered, many scientists doubted that she was a phantasticus tortoise since she lacked the striking saddleback flaring of the male historical specimen. However, genetic analyses revealed that the tortoise belonged in fact to the same species. “We saw – honestly, to my surprise – that Fernanda was very similar to the one that they found on that island more than 100 years ago, and both of those were very different from all of the other islands’ tortoises,” said study lead author Stephen Gaughran, a postdoctoral fellow in Molecular Evolution at Princeton.

Dr. Gaughran and his colleagues estimate that Fernanda is well over 50 years old, but she is rather small, possibly due to the inadequate diet caused by limited vegetation on the Fernandina Island which may have stunted her growth. She is now kept at the Galápagos National Park Tortoise Center, a rescue and breeding facility, where scientists are exploring what they can do to keep the giant tortoise species alive.

“The finding of one alive specimen gives hope and also opens up new questions, as many mysteries still remain,” said study senior author Adalgisa Caccone, a senior research scientist in Ecology and Evolutionary Biology at Yale. “Are there more tortoises on Fernandina that can be brought back into captivity to start a breeding program? How did tortoises colonize Fernandina, and what is their evolutionary relationship to the other giant Galápagos tortoises? This also shows the importance of using museum collections to understand the past,” she concluded.