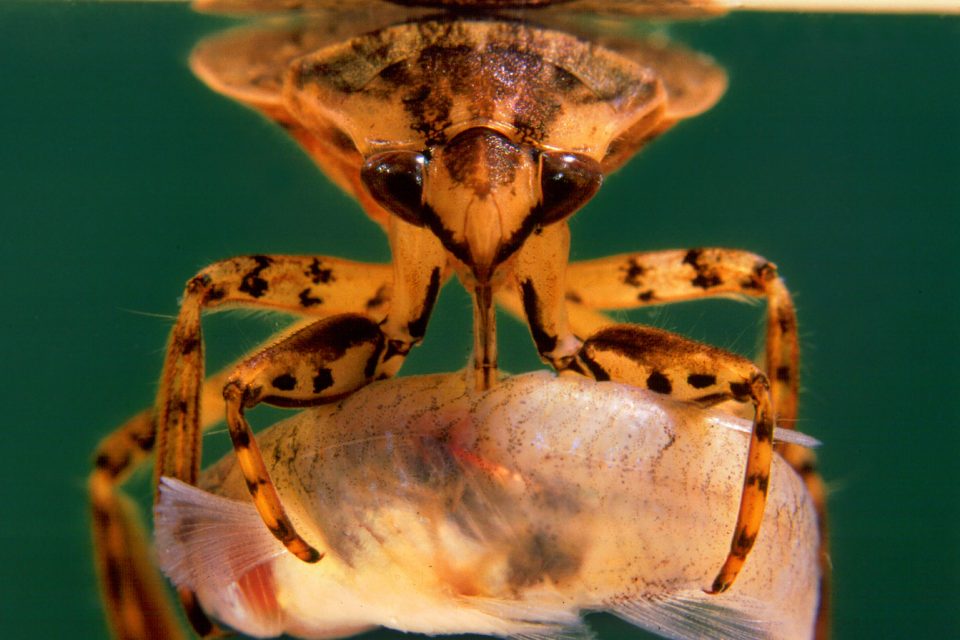 Giant water bugs are fierce and fearless predators. Sharks, killer whales, leopard seals, and crocodiles are just a few of the fiercest aquatic predators known to exist, but a new study shows that giant water bugs also deserve a spot at the top of the list.

You would be hard pressed to find an aquatic insect more aggressive than giant water bugs, which have been known to go after ducks, fish, snakes, and even turtles.

A new study published in the journal Entomological Science compiles decades of research on water bugs.

The research was conducted by Shin-ya Ohba from Nagasaki University, and the study provides a comprehensive view of the insects and insight into their ecology and hunting strategies.

Some giant water bugs can take down prey ten times its size, and the bugs are able to perch on aquatic plants, blending into the background and waiting for a fish or snake to come across its path.

“They just take up a position holding onto a plant in the water, and anything that moves in front of them, they’ll grab it and try to eat it,” Charles Swart, a senior lecturer at Trinity College who has studied giant water bugs but was not involved in the study, told National Geographic.

Once an unlucky prey is caught, the giant water bug’s strong front legs keep the prey immobilized as the bug starts to feed on their victim in a particularly brutal manner.

The giant water bug bites down on their prey, injecting enzymes and chemicals into the animal through a sharp straw-like proboscis that the bug then uses to suck up the broken down insides.

For larger prey, it can take hours for the water bug to finish feeding and unfortunately for the prey, it’s alive for a portion of that time.

Giant water bugs will attack pretty much anything crosses its path, even humans, but although their bite is painful, it is not known if the bite is venomous.

Male giant water bugs are tasked with caring for young, and in some giant water bug species, a female will kill the eggs of her competitor to ensure that a male will only carry her offspring.

Like any top predator, giant water bugs play a key role in their respective aquatic ecosystems and it is essential to study the species and also ensure that their aquatic habitats are protected.