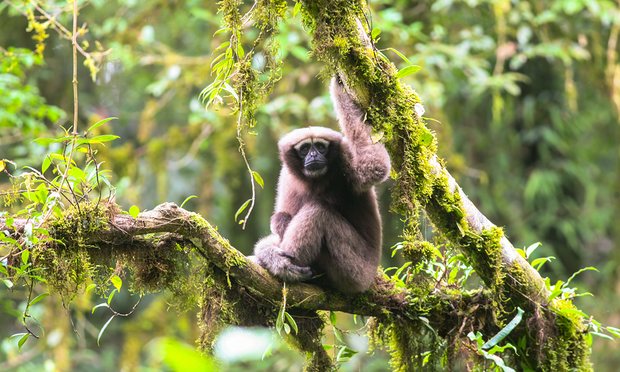 They’re adorable, they’re furry, they’re: gibbon! And this week, it was announced that a new species of gibbon has been discovered living in the rainforests of southwestern China.

The new species has been officially named the Skywalker hoolock gibbon. As it happens, the discoverers are major Star Wars fans. But the name is also a reference to the Chinese characters of its scientific name, Hooklock tianxing, which means “Heaven’s movement.”

The discovery was a collaborative effort made by a team of scientists from both the Zoological Society of London and Sun Yat-sen University in China.

“In this area, so many species have declined or gone extinct because of habitat loss, hunting, and general human overpopulation,” Dr. Sam Turvey from the Zoological Society of London told BBC News. “So it’s an absolute privilege to see something as special and as rare as a gibbon in a canopy in a Chinese rainforest, and especially when it turns out that the gibbons are actually a new species previously unrecognizable by science.”

The team was led by Fan Peng-Fei from Sun Yat-sen University, who was the first to detect that the gibbons they were studying in a Gaoligongshan nature reserve were different. Peng-Fei noted that these gibbons had unusual facial features, such as white beards and eyebrows, and their voices sounded different.

The team ran a full set of genetic testing to confirm that the group they observed were indeed, a new species. They estimate that roughly 200 Skywalker gibbons are currently alive in southwest China.

But the researchers warn that the new species of gibbon should be classified as endangered due to ongoing habitat loss and fragmentation.