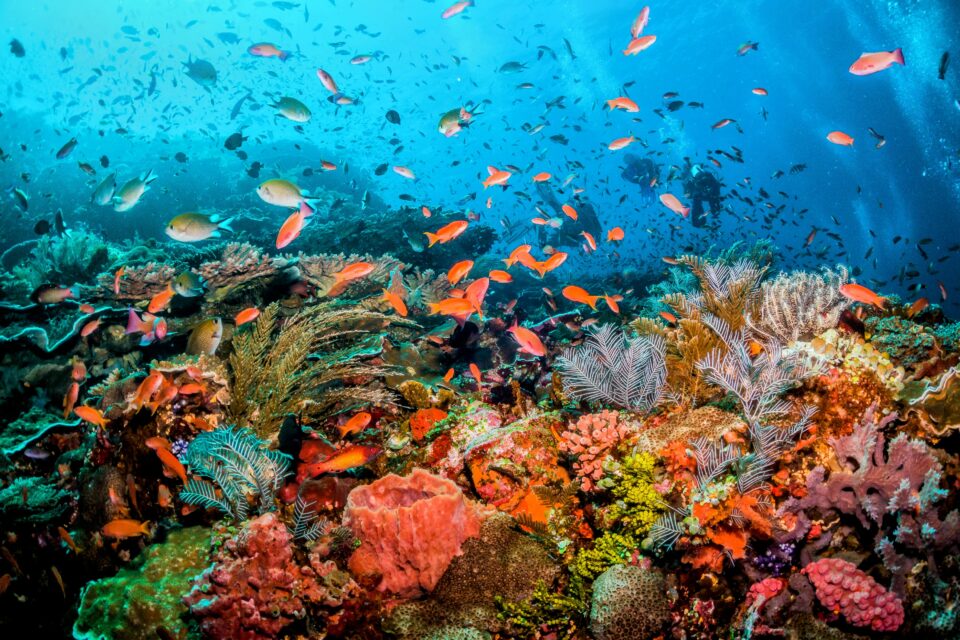 A new study from the Khaled bin Sultan Living Oceans Foundation (KSLOF) has investigated the state of coral reefs around the world. The researchers surveyed and mapped coral reefs in the Atlantic, Pacific, and Indian Oceans and the Red Sea.

The Global Reef Expedition Final Report provides valuable baseline data on the status of coral reefs at a vital point in time that can aid the conservation efforts both locally and globally. The report also offers guidance to researchers and scientists on conservation measures.

Coral reefs are one of the most diverse ecosystems in the world. They provide a wide range of environmental and economic benefits. Today, coastal reefs are declining due to various natural and man-made factors such as coastal development, pollution, disease, severe storms, and climate change.

As the oceans continue to warm, massive coral bleaching incidents have become increasingly common and severe. Scientists estimated that there was a 50 percent decline in coral reefs in the last 40 years.

To address this crisis, the Khaled bin Sultan Living Oceans Foundation, a US-based nonprofit environmental organization, launched the Global Reef Expedition. This research was the result of the collective work of hundreds of scientists from around the world, who conducted tens of thousands of standardised scientific assessments at over 1,000 reefs in 16 nations.

Scientists working on the project collaborated closely with local experts, managers, educators, and government officials to assist the foundation in collecting the data needed to establish science-based solutions for the conservation of reefs.

The expedition aimed to map and characterize coral reef ecosystems, assess the current status of and threats to the world’s reefs and study the factors that enhance a reef’s ability to resist, survive, and recover from major disturbance events such as bleaching, cyclone damage, and crown-of-thorns starfish outbreaks.

“The Global Reef Expedition was a monumental achievement. It owes its success to nimble planning and a common vision shared by a broad group of forward-thinking scientists, managers, and educators,” said Sam Purkis, KSLOF’s Chief Scientist. “I have no doubt that the baseline determined by the Global Reef Expedition for the world’s reefs will remain a reference for centuries to come.”

During the course of the study, the Global Reef Expedition also engaged in education and outreach projects to promote ocean literacy, enlighten students and community leaders about coral reefs, and encourage conservation action.

The report emphasizes that in order to battle the coral reef crisis, prompt action is required to address climate change and overfishing.

“One of our most significant findings from the Global Reef Expedition was that nearly every country we studied showed signs of overfishing. Even on some of the most remote and well-protected reefs,” said Renée Carlton, the lead author of the report. She noted that finding fewer and smaller fish on the reef poses problems for the health of the reef itself as well as the people who depend upon them for protein and income.

“We know marine protected areas work, in most instances these reefs had some of the best coral cover and reef fish communities, but climate change, storms, and outbreaks of crown-of-thorns starfish can still have deadly consequences to a reef, no matter how remote or well-protected it is.”

According to the experts, control measures such as reducing pollution and establishing marine protected areas can be exercised to save local reefs from the adverse influences of these global problems. The report suggests that with proper implementation, these measures may be able to aid in the preservation of the remaining reefs.

The study found that the participation of local communities in the conservation efforts was essential to achieving success. The foundation was able to provide countries with the data they required to manage their marine resources effectively by involving local experts and government officials in data collection, combining scientific findings with outreach and education efforts, and addressing disparities in ocean literacy.

“Findings from the Global Reef Expedition are already helping countries protect and preserve their reefs and coastal marine resources,” said Alexandra Dempsey, the Director of Science Management at the Foundation. “Marine protected areas, fisheries closures, and traditionally managed areas have been established in The Bahamas, Jamaica, Fiji, and the Cook Islands, using information collected on the Expedition.”

The Khaled bin Sultan Living Oceans Foundation ensured that the data and results from the study is shared freely with all stakeholders to aid them in their conservation efforts.

The Global Reef Expedition was funded and initiated by Prince Khaled bin Sultan. Upon completion of the research, he expressed his hope that the discoveries will help to “leave a legacy of ocean protection, so our children, and their children’s children, can also enjoy the beauty and magic of a coral reef.”

The Khaled bin Sultan Living Oceans Foundation is a non-profit environmental organization established in the United States that combines scientific study, outreach, and education to conserve and restore the world’s oceans. The Living Oceans Foundation, as part of its commitment to Science Without Borders®, distributes data and information to organisations, governments, scientists, and local people so that they can use the most up-to-date science to work toward long-term ocean protection. www.livingoceansfoundation.org

The Global Reef Expedition Final Report was published on October 7th, 2021. Copies of the report are available to view and download on the foundation’s website at lof.org.