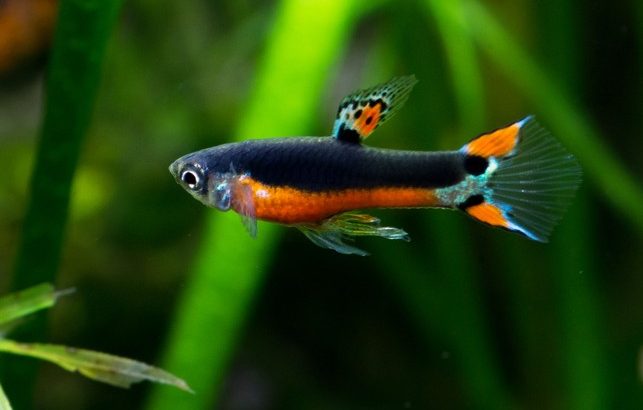 Guppies use black eyes and quick reflexes to escape predators

Trinidadian guppies face their predators with the skills of a matador, manipulating the movement of their attackers to execute the perfect escape. An international research team led by the University of Exeter discovered this strategy after observing guppies interacting with pike cichlids.

The guppies approach cichlids and get their attention by conspicuously turning the irises of their eyes black. This causes the fish to lunge at the guppies’ heads instead of their bodies. The tiny fish respond by suddenly whipping their heads out of the way so the cichlids miss their target.

“We noticed that guppies would approach a cichlid at an angle, quickly darkening their eyes to jet-black, and then waiting to see if it would attack,” said study lead author Dr. Robert Heathcote.

“Cichlids are ambush predators, lying in wait like a coiled spring before launching themselves at their prey.The guppies actually use their eyes to get the predator’s attention, causing them to lunge at a guppy’s head rather than its body.”

“Whilst it seems completely counterintuitive to make a predator attack your head, this strategy works incredibly well because guppies wait until the predator commits to its attack before pivoting out of the way.”

“The speed of the whole interaction is extraordinary – at around three hundredths of a second – so was only observable using a high-speed camera.”

Many animals use conspicuous colors for communication, attracting mates, or warding off predators. The divertive strategy used by guppies was unknown prior to this study, but the researchers speculate that it is used by other species as well.

“We don’t know for sure, but it seems highly likely that other animals also use a ‘matador’ strategy like the one we have identified in guppies,” said Professor Darren Croft.

“Eyes are one of the most easily recognized structures in the natural world and many species go to great lengths to conceal and camouflage their eyes to avoid unwanted attention from predators.

“Some species, however, have noticeable or prominent eyes and, for the most part, it has remained a mystery as to why this would be. Our latest research gives new insight into why ‘conspicuous’ and colorful eyes have evolved.”

The experts were surprised to find that larger guppies were better at escaping cichlids compared to smaller ones.

“As animals become larger, they generally become less agile. If larger prey don’t have weapons or other ways of defending themselves, this can result in them being easier for predators to catch,” said Dr. Heathcote.

“Since bigger animals produce more or larger offspring, it would be really exciting to find out if the animals that use these kinds of strategies have evolved to become larger.” 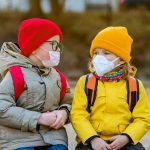 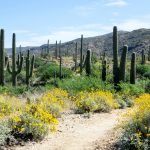