Habitat destruction leads to confrontations with crocodiles in Indonesia • Earth.com 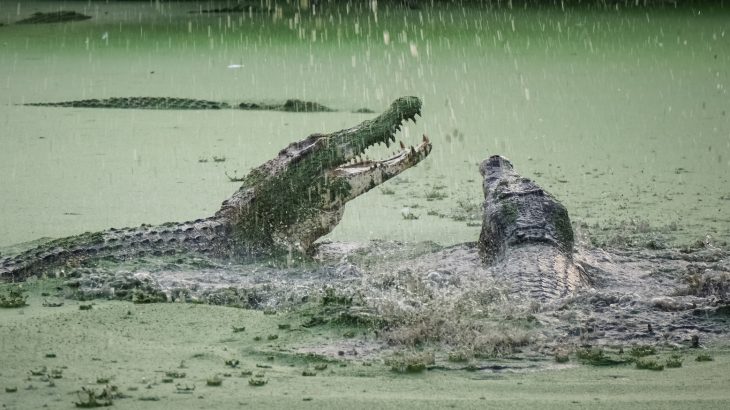 Habitat destruction leads to confrontations with crocodiles in Indonesia

Living with large reptiles that can eat humans is always a tenuous position.  The reality of being eaten by a crocodilian is a very ancient one for humans. Fossil evidence from the Olduvai Gorge in Tanzania shows that hominid fossils, perhaps those of human ancestors, were preyed upon by a crocodile, Crocodylus anthropophagus as long as 1.8 million years ago.  Alligators in Florida have killed 24 people since 1973.  CrocBITE, the worldwide crocodilian attack database, has already recorded 116 worldwide crocodilian attacks on humans this year, some of which were fatal.

Attacks by crocodiles have captured the imagination both in the US and abroad.  Crawl, a movie in which a giant crocodilian hunts people trapped in a flooded basement in Florida, hit theaters July 12 in the US.  In other parts of the world, crocodilians are more reality than terrifying flight of imagination, but sometimes unreasonable fear is mixed in.  The San Pedro Sun reported in 2010 that a crocodile conservation facility was burned down and crocodiles killed and mutilated by a mob.  The mob was apparently motivated by the advice of a clairvoyant who falsely claimed the remains of missing children would be found in the bellies of the crocodiles.

Despite the violence of crocodilians and the intense fear humans often feel for them, humans and crocodilians have found ways to coexist in some parts of the world.  In the United States, American Alligator populations plunged close to extinction from hunting and habitat destruction. Alligators were put on the endangered species list in 1967, but were removed in the 1980s after a long recovery.

Today, the American Alligator is considered a conservation success story.  Defenders of Wildlife estimates that there are now 5 million alligators in the southeastern US and as many as 1.2 million in Florida alone.  The species is carefully managed for hunting and raised in captivity for entertainment as well as for alligator skins used to make clothing and accessories.

Crocodiles in Australia are also thriving. So called ‘salties’ are one of the most dangerous crocodilians to humans.  Despite their common name, salt water crocodiles (Crocodylus porosus) can live in fresh water as well as salt.  Haika Magazine reported in 2016 that despite a previous history of decline, like the American Alligator the species had rebounded.  According to the Australian Department of the Environment and Energy, the population of salt water crocodiles is estimated to be 100,000, although there could be as many as 200,000 living in the wild.  Much like in the United States, crocodiles are raised in captivity but on an even broader scale for skins, meat and entertainment for tourists.  Native peoples have the right to limited hunting of crocodiles as well.

Despite these instances of successfully managing co-habitation between crocodilians and humans, it doesn’t always work out so well.  Mongabay reports that in Indonesia, salt water crocodile sightings and conflicts are on the rise.  Last February, villagers captured a crocodile, tied its mouth shut and beat it before turning the animal over to a wildlife organization which released the crocodile far from human habitation.  The crocodile was suspected of preying on local villagers livestock and the presence of the large reptile was seen as threatening, thus prompting the villagers to attack the animal. The fear of more crocodiles following in the wake of the one captured is very real in a region where crocodile attacks are on the rise.

Human encroachment into the habitat of a dangerous wild animal is a double-edged sword.  On the one hand, the habitat destruction that comes with human development endangers the animal.  On the other hand, more humans close to (in this case dangerous) wild animals increases the likelihood of conflict.  Over the long history of humanity, we’ve mostly killed off dangerous animals or moved away from them, to the point where less of us are knowledgeable about the proper way to live near dangerous predators or are willing to accept the risk of doing so.  One of the purposes of parks is to preserve wildlife in a way that isn’t very threatening to humans or human society.

Wild animals don’t recognize the boundaries of parks, though.  Alligators can potentially be in almost any pool of water within their range, even if it’s an artificial pool of water inside Disney World. Unfortunately, humans are increasingly living in close quarters with dangerous crocodilians.

The reason for the increase in crocodile encounters in part of Indonesia is due to a greater human presence and destruction of habitat.  Blast fishing and turn over of habitat into farms push the crocodiles into a desperate situation with less of their traditional food or habitat available.  Sometimes human encounters with crocodiles can become incredibly nasty. Reuters reported that last year, a man was killed by a crocodile at a conservation breeding facility in Indonesia.  In the wake of the man’s death, the local villagers killed all 292 crocodiles in the facility with clubs, knives and hammers in revenge.

For now in America and Australia, crocodilians are protected by law but human populations in those areas are growing as well.  Haika Magazine points out that Darwin, right in salt water crocodile’s range, is one of the fastest growing capitals in Australia.  Key West Aquarium suggests it’s best to not encounter alligators in close proximity, however human populations in Florida it notes are 20 million in a state with one million alligators.  People are increasingly close to the dangerous animals. The conservationists managing hunting and farming the crocodilians point to monetization as a way to save dangerous animals.

I wonder if putting a cash value is enough to protect crocodilians or if it cheapens them and actually ourselves.  If we’re concerned for our own lives, aren’t we monetizing ourselves when we put a price on a crocodile or alligator?  It seems what we need more is true respect and we rarely respect what we spend money on, we instead objectify it. It also denies the crocodilians their place as free agents in complex ecosystems. Is there enough room for danger left in the world?