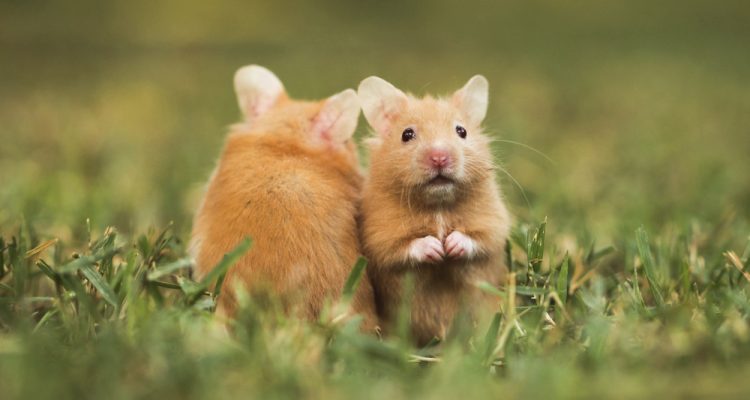 Hamsters fed corn turn from cute and cuddly into something from a horror movie.

Hamsters are cuddly, adorable, and sweet – until you feed them a corn-based diet. In a scene that’s reminiscent of a 1980’s horror movie, corn-fed hamsters turn into dark-tongued cannibals that store their young in their hamster pantries and munch on them during mealtimes.

Surprised? Scientists in northeastern France were, too, as they started what they thought would be an experiment on how a hamster’s diet affects its ability to reproduce in the wild. They tested groups of hamsters with two different diets – one that was corn-based and one that was wheat-based. Both diets included sides of yummy worms and clover.

Neither group had problems reproducing and had babies at similar rates. However, the mortality rates of the babies in the corn-based diet group were higher. Researchers soon found that this was because the mothers would store the tiny pups in with their supply of maize and then eat it all – pups included.

The reason? Scientists suspected Vitamin B3 deficiency after they noted that the corn-fed hamsters had dark, swollen tongues, thick blood, and would run around in circles and pound on their feeders when scientists appeared in the room. To confirm their suspicion, they added Vitamin B3 supplements to the hamsters’ diets without making any additional changes. The frantic and cannibalistic behavior ceased.

The team of researchers, led by Mathilde Tissier at the University of Strasbourg, believe that the study sheds light on the plummeting population of Cricetus cricetus hamsters in western Europe. There, hamsters live in virtual mazes of maize as their natural habitat has given way to industrial corn farming. The scientists published their findings in the British Royal Society journal Proceedings B.

Gerard Baumgart, President of the Research Centre for Environmental Protection in Alsace has worked for years to protect endangered hamster. He believes the study is a call to action and said to the AFP, “There’s clearly an imbalance. Our hamster habitat is collapsing.”