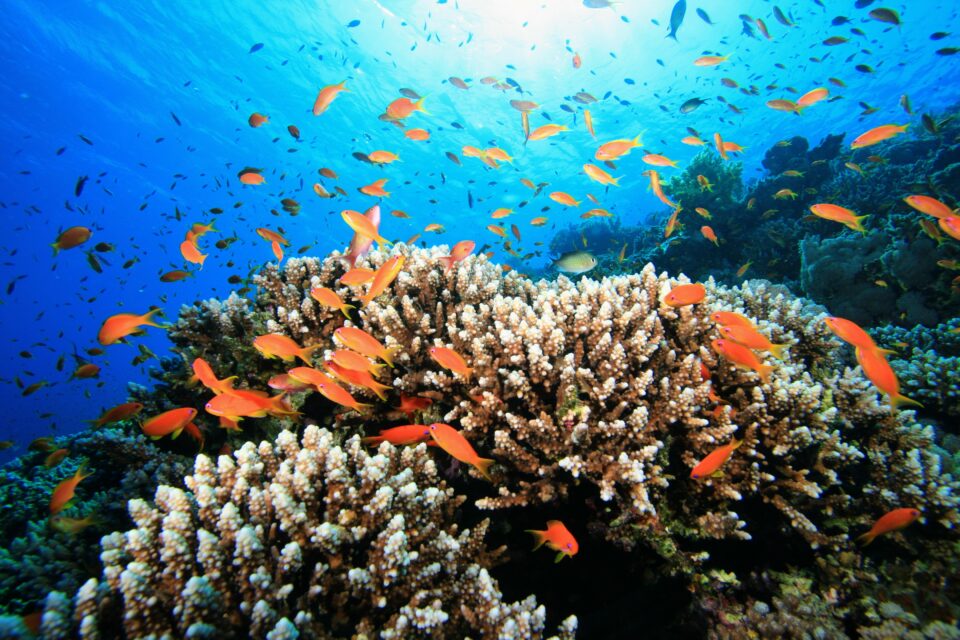 Divers who visit ocean coral reefs can hear the sounds of the reef organisms as they go about their daily business of feeding, communicating and moving about. The underwater sounds are reminiscent of static on a poorly-tuned radio, or the tantalizing hiss of eggs and bacon frying in the pan. In fact, when it is teeming with life, a coral reef is one of the noisiest places in the ocean, say scientists.

The characteristic sounds come from many sources, including the rasp of urchin and starfish teeth as they graze against the hard surfaces, shrimps that stun their prey with loud bubbles produced by their pincers, and fish that pluck off bits of coral. Added to these are the distant sounds of dolphins and whales communicating, and the zinging of tiny bubbles of oxygen as they zoom towards the sea surface. In fact, the more complex the soundscape, the more healthy the reef.

For researchers, sound recordings of these underwater activities could be an effective and economical way to assess the health of vulnerable reefs, since reefs that degrade tend to become quieter and less diverse in their acoustic characteristics. This type of monitoring offers a long-term and nonintrusive way to assess the state of reefs around the world, which are threatened by the effects of fishing, pollution and climate change.

At the upcoming 182nd Meeting of the Acoustical Society of America, Lauren Freeman of the U.S. Naval Undersea Warfare Center Newport, will present the results of her experiments using passive acoustic monitoring to evaluate the health of coral reefs. Her presentation, “Coral Reef and Temperate Coastal Soundscape Features Evident in Directional and Omnidirectional Passive Acoustic Time Series,” will take place on May 25th.

Freeman and her team used an acoustic array to monitor reefs off the coast of Hawaii, with the premise that degraded coral reefs become unsuitable for marine organisms and, as they abandon the communities, the soundscapes become less rich and diverse. In degraded communities, there tend to be fewer fish calls and a greater preponderance of high frequency noise from algae photosynthesizing and releasing bubbles of oxygen, which ring out as they rise through the water.

“There is a natural competition between corals and macroalgae on all coral reefs. In most cases with a dying or degraded reef, the macroalgae is winning and covers a lot more of the surface,” said Freeman. “On a pristine reef, you would see very little macroalgae, and a lot of herbivorous fish that help eat the macroalgae.”

Freeman and her team compared the results from Hawaii to similar data from Bermuda and New England. Interestingly, Hawaii and Bermuda both showed a characteristic reef evening chorus, where the sound levels increased immediately prior to sunset. The New England reef underwent similar changes near dusk.

“Almost every time I conduct an experiment, we learn more about the complexities and intricacies of ambient biological soundscapes,” said Freeman. “It’s so exciting to continue to discover more about ocean ecosystems.”