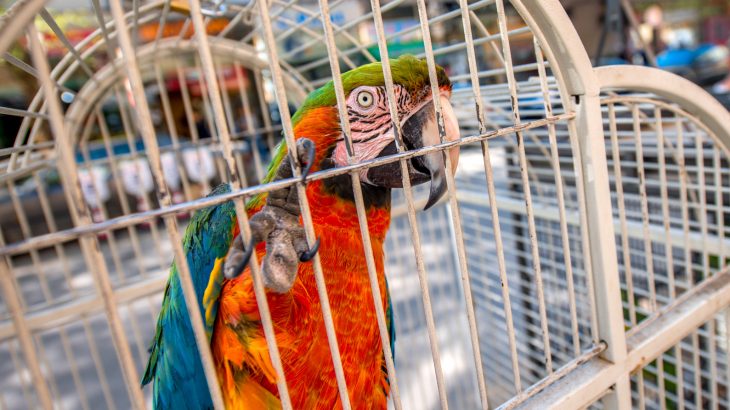 According to the US Fish & Wildlife Service, the trade of illegal wildlife is thought to be a multi-billion dollar business. Many animals have been used to highlight the dangers of this illegal trade and promote tougher laws and regulations. Rhinoceros, elephants, even the lesser known but more interesting pangolin are widely known to be harmed by the illegal trade in animal parts.

Less often considered but no less detrimental to wild ecosystems is the illegal trade in exotic pets. As we’ve reported, exotic pets can be dangerous and harmful to animal populations and local ecosystems. In Latin America, Smithsonian reports that biologists have found as much as 30% of parrot nests raided for the pet trade. I’ve been disappointed while volunteering in parrot conservation work in the Bahamas to find nest cavities cleared of parrot chicks overnight.

Wildlife smuggling as a whole, beyond just the illegal pet trade, is a large and global affair in cases involving hundreds of countries and transnational borders. The illegal wildlife trade can also be fairly localized. Parrots, monkeys and other wild animals have been traditionally kept as pets in Latin America. Many North Americans remember fondly pet lizards, raccoons or turtles from their youth. Smithsonian reports that 30% of Brazilians and 25% of Costa Ricans recently surveyed said they’ve kept wild animals as pets. Wild pets kept in their home country are not technically ‘exotic’ but they certainly damage wild populations. These pets can also fuel the illegal export of other animals out of the country, where they become truly exotic pets.

There are obviously terrible examples from the exotic pet trade like pet monkeys, but historically even the decline of Texas’ horned lizards was contributed to by the pet trade. The trade in horned lizards has declined and there’s hope that their populations will rebound but not so with many other exotic pets. The popularity of exotic pets can be partially blamed on e-commerce and social media. Videos of adorable slow loris’ abound online, despite that the animals cruelly have teeth pulled to make them ‘safe’ for human contact.

Beyond the cruelty, removing the slow loris and other animals from the wild makes it harder for the wild population to exist at all. In places like Madagascar, radiated tortoises have been smuggled out of the country for the pet trade, decimating the wild population.

Not only can the removal of an animal from the wild hurt the ecosystem, it can be damaging later when an irresponsible pet owner dumps an unwanted animal in an environment it isn’t native to. The introduction of burmese pythons to the Florida Everglades is a perfect example of a non-native animal taking root with detrimental consequences. Beautiful but dangerous lion fish have also taken a toll on the ecology of the Caribbean and surrounding areas, including marine ecosystems off Florida. Without the trade in exotic pets, both the legal and illegal, it seems unlikely that these invasive non-native species would have made it into the US in viable numbers.

Related to the smuggling of wild animals is the increased traffic in plants both live plants taken illegally for sale as house plants and the poaching of endangered trees for high end and illicit furniture.

Of course, government agents the world over have been fighting the illegal trade in live wildlife as well as parts from endangered species. It’s not just the trade itself that damages the environment and wildlife, it is also the money from it that contributes to other types of organized crime. CBS reported earlier this year on a case where an organization was caught smuggling wildlife as well as heroine. A congressional report says that wildlife smuggling is sometimes even connected to foreign military groups, insurrectionists and crime syndicates. NPR reported earlier this month on one of the largest wildlife smuggling busts to date. The bust was coordinated by the World Customs Organization and Interpol, seizing apes parrots, big cats and elephant tusks among other living wildlife and remains. Nearly 2000 species of wildlife and plants were seized in the bust.

The operation was dubbed “Operation Thunderball” and worked out of Singapore, ultimately arresting 600 suspects. This crackdown is the third in large scale crackdowns and the first to involve more than 100 countries. Other related projects under Interpol have been successful and are increasingly large scale. Operations under Project Wisdom, for instance, have led to the arrest of 1,100 people with conviction rates of over 80% and seizure of 50,000 carved ivory items. Project Wisdom is focused solely on elephants and rhinoceros. Other operations focus on different regions or different specific wildlife species, like Asia or tigers.

Much of the trade in animal parts as well as exotic pets is premised on ignorance, superstition, or a simple lack of caring on the part of the end consumer. I’ve seen bushmeat markets in west Africa where Nile monitors are sold alive in cramped mesh sacks, sometimes next to grilled monkey. From the comfort of a couch at home, sugar gliders, koalas, monkeys and slow lorises seem like adorable pets, and it’s easy to not consider how a parrot comes to be at a pet shop.

For those desperate for cures to a host of ailments in China, things like tiger bones or rhinoceros horn might seem to be miracle drugs to those who don’t know better. For as long as human history, we’ve exploited wildlife in all these ways but for most of that time it was fairly localized. With global networks of consumers, we can detachedly destroy wildlife on the other side of the globe by our consumption. It’s up to us as global consumers to also shoulder the responsibility of global citizens. Supporting agencies that bust illegal trafficking and not participating in trafficking is a good start.