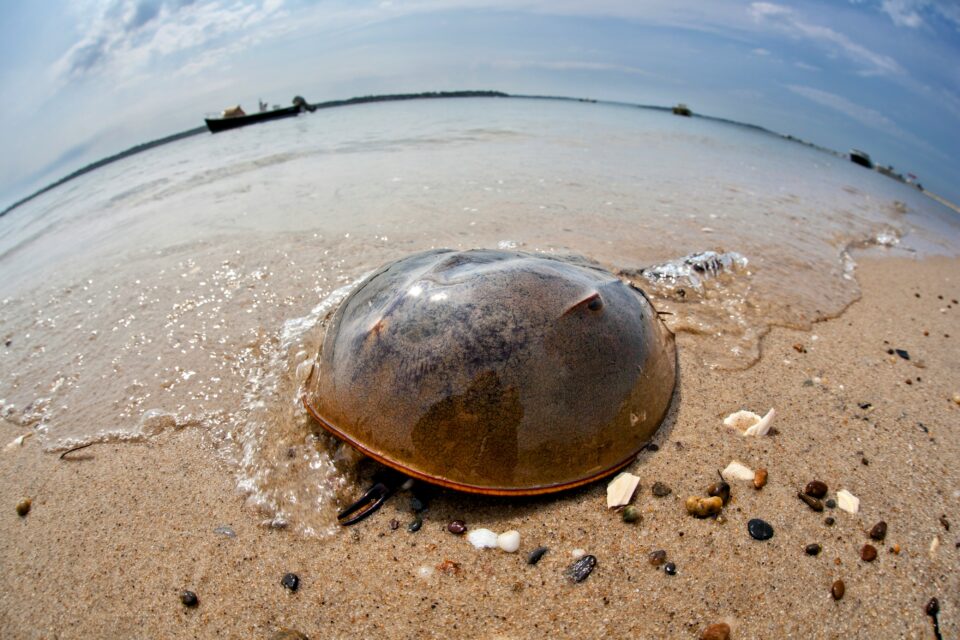 Horseshoe crabs are unusual creatures. They are not crabs at all, and not even crustaceans. But they are in the phylum Arthropoda, along with insects, and are most closely related to arachnids, such as spiders and scorpions. They have an evolutionary history that stretches back 300 million years, to the times before the advent of dinosaurs.

A recent study on how the eyes of horseshoe crabs enable them to see has now revealed another unusual feature about these fascinating animals. The Atlantic horseshoe crab, Limulus Polyphemus, has six rudimentary eyes, two ocelli (light-sensitive eye spots), and a pair of lateral compound eyes. These compound eyes are the largest to be found in nature and, although they have been studied in detail before, the actual mechanism whereby they focus light has not been established.

Compound eyes are common in insects and crustaceans. They consist of an array of lenses, made up of a cornea and inward-projecting cones, that collect light from different directions and focus it precisely in one spot, where the receptor cells are located.

“The compound eye is nature’s answer to the need of capturing a wide field of view in an otherwise small eye. It’s a similar challenge to that faced by modern camera designers who want to further and further miniaturize the cameras while keeping a wide field of view of above 90 degrees,” explained Professor Yael Politi, research group leader at the B CUBE – Center for Molecular Bioengineering at the Technical University of Dresden.

Horseshoe crabs have primitive compound eyes in comparison to those of other arthropods, such as insects and crustaceans. Instead of using the typical glassy proteins to build the cornea and inward projecting cones that focus the light in each unit of the compound eye, the horseshoe crab’s cornea and cones are made from cuticle – the material that forms the exoskeleton.

“The arthropod cuticle is a composite material consisting of proteins and a crystalline polymer known as chitin. It is the characteristic component of insects, spiders, and other arthropods, who use it to build their skin and legs, the so-called exoskeleton,” said Professor Politi.

Cuticle is characterized by being a versatile material that has been adapted to the needs of arthropods over evolutionary time. In some instances its composite is adjusted to be more stiff and protective, while in other instances it is softer and more flexible. However, it has not been used elsewhere in the arthropods as a substance from which to build a light-focusing apparatus.

Professor Politi said that using cuticle to build lenses is unusual and the extent to which the horseshoe crab repurposes it for its eyes is nothing short of remarkable. “We wanted to understand exactly how the animal modified the structure and composition of the cuticle, a material mostly known for its outstanding mechanical features, to build an array of lenses with variable optical properties.”

The team worked together with researchers from Potsdam and Brno, and used large-scale European synchrotron radiation facilities to analyze the lenses of the horseshoe crab and understand the structure–property–function relationships in the cuticle material that forms the lens components. The researchers looked both at the organization of the cuticle layers, as well as the ratio of the individual components, the water content, and the elemental composition of the material. As a result, they found a variety of adaptations that together allow the cuticle to become an excellent optical element.

“Working at the European Synchrotron Radiation Facility in Grenoble and BESSY II Light Source in Berlin allowed us to use synchrotrons and their very small focused light beams to perform X-ray diffraction and fluorescence. Thanks to these techniques, we were able to map the molecular structure of the cuticle components at different length scales and to find out what chemical elements are used to build this particular version of the cuticle,” explained study lead author Oliver Spaeker, Ph.D. student at the Max Planck Institute of Colloids and Interfaces in Potsdam.

The results, published in the journal Advanced Science, reveal that multiple adaptations at the level of cuticle composition and structure vary the refractive index of the cornea and cones, such that light may be successfully focused on the photoreceptor cells. “Everything from the local composition of the cuticle, in particular the addition of bromine, to multiple changes in the architecture of the composite, i.e., the ratio between its components, organization of the proteins, the varying water content, and the overall shape of the lens … It all contributes to making cuticle into a material with excellent optical properties,” said Professor Politi.

“What surprised us, in the end, the most was that the cuticle lenses seem to work so well that the animal needed to introduce pigments to actually reduce the amount of light that is collected by the lens.”

“The L. polyphemus cornea is indeed a fascinating example of the flexibility and multifunctionality of arthropod cuticle, based on a simple “blue-print” and made from modular building blocks,” concluded the researchers.

In future, the research group aims to understand and extract design principles from biomaterials. “My research group aims to learn from nature – the oldest and most experienced iterative designer in the world, working under the constraints of evolution,” said Professor Politi. In the long run, such insights can be used to produce better materials that are less complex and are easier to recycle, while performing at least as well as required.