How death’s-head hawkmoths navigate the Alps at night • Earth.com 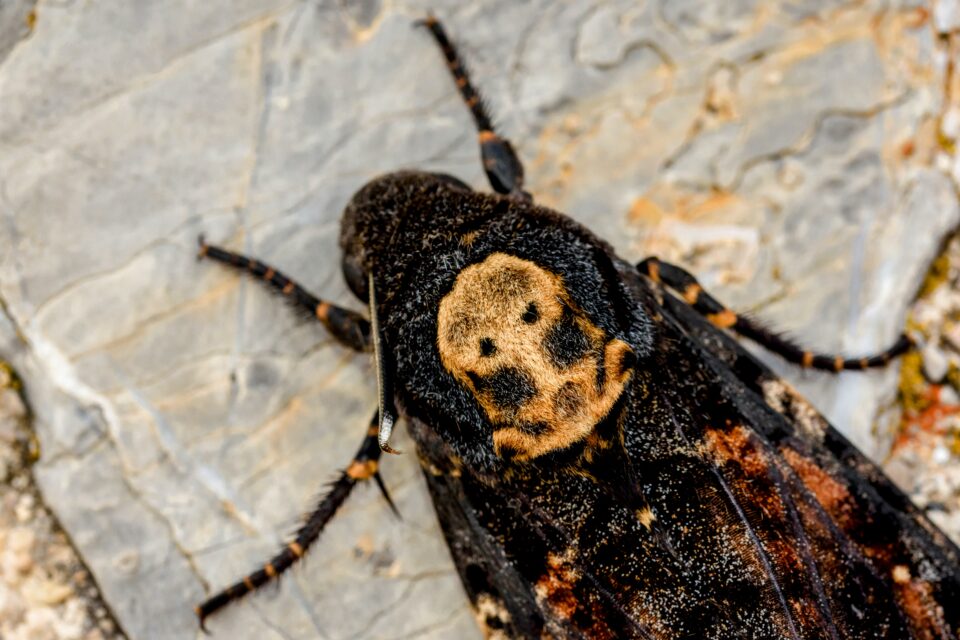 Every year, trillions of insects in Western Europe undertake seasonal migrations; usually they move southward towards the Mediterranean and North Africa at the end of the northern summer, and return northward during the spring or early summer. The same pathway is followed by many species of moths, butterflies and hoverflies; vast numbers of these insects cross the Alps in order to fly as directly as possible to their overwintering destinations.

Although these enormous migrations are understood on a population level, very little is known about how individual insects manage to navigate their way through the considerable obstacles, or what methods they use to locate their destinations. This gap in understanding is due, mostly, to the challenge of tracking these small animals as they fly, surprisingly rapidly and often at night.

A new study on migrating death’s-head hawkmoths (Acherontia atropos) has now used miniscule tracking devices and a light aircraft to track seven individual moths as they migrated across the Alps at night. The study, published by the American Association for the Advancement of Science (AAAS), reveals that these hawkmoths make use of complex migratory strategies to stay on track.

The death’s-head hawkmoth, known for the sinister skull-shaped marking on its thorax, is the largest lepidopteran in Europe, weighing in at up to 3.5g. It is a long-distance Afro-Palearctic migrant that arrives to breed in Europe, north of the Alps, in spring each year. The subsequent generation returns south the following autumn to winter-breeding regions in the Mediterranean Basin and sub-Saharan Africa, covering a distance of up to 4,000km.

The researchers fitted tiny, very high frequency radio transmitters to the backs of 14 hawkmoths and recorded their precise GPS locations from a light aircraft at regular intervals (every 5 to 15 min, when possible) throughout their migration. They obtained detailed tracks for seven of the moths. The moths all started their migratory flights shortly after sunset, and were followed by the researchers for between 1 and 3.7 hours. During this time, the moths flew a mean distance of 63.7km, with the longest distance being 89.6km. This represents the longest distance over which any insect has been continuously tracked in the field.

A team led by Dr. Myles Menz from the Max Planck Institute of Animal Behavior discovered that the moths did not just fly in a direction with favorable tailwinds, as had been proposed by other scientists in the past. Instead, the moths flew in the most direct straight line to their destination, but were able to correct their specific flight headings constantly, as they came across disruptive winds and specific features of the terrain.

The hawkmoths traveled at a mean ground speed of 33.8km/hour, and they all travelled in straight lines along their entire flight paths, which lasted tens of kilometers. This direct line was maintained, despite the presence of winds of varying strengths and directions throughout their course.

According to the researchers, maintaining a consistently straight flight trajectory and flight speed throughout the night under variable wind conditions strongly suggests that the moths have an internal compass mechanism. This, along with the insect’s exceptional night vision, indicates that the hawkmoths likely use a combination of visual landmarks and Earth’s magnetic field to navigate considerable distances during migration.

Interestingly enough, the moths chose pathways through the mountains that had topographical features (such as high-altitude passes) which allowed them to avoid the very highest altitudes when crossing the Alps. One of these pathways involved using a wide valley running west-southwest that enabled the moths to circumvent the Alps altogether.

The research, published in the journal Science, sheds new light on the complex and sophisticated behavior of hawkmoths while on seasonal migrations. “To maintain such straight trajectories over long periods of time, as seen here, the moths must regularly update their positions relative to whichever navigational cues they rely on,” wrote the study authors. The results show that complex migratory strategies are not the preserve of vertebrates alone, but can be found in these remarkable insects as well.