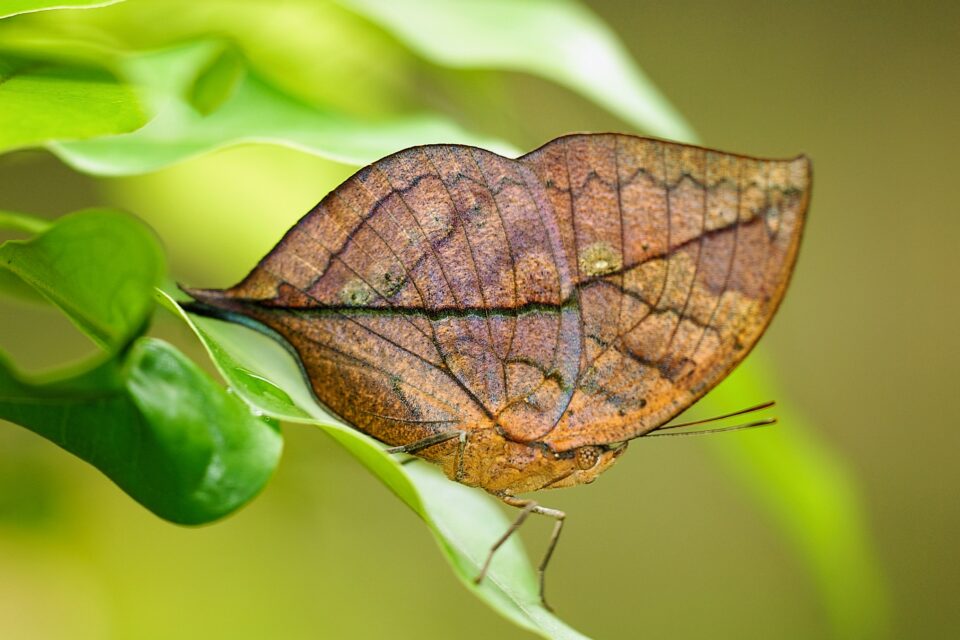 Oakleaf butterflies are marvelous mimics. Although the upper surfaces of their wings are colored with bright oranges and blues, the lower surfaces are dull brown and resemble dead leaves. When an oakleaf butterfly alights on a plant and folds its wings closed, it masquerades perfectly as a dead leaf, right down to the fine details of leaf stalk, midrib, veins and patches of decay. Until now, the genetics controlling this remarkable phenomenon have not been revealed.

In recent research, published in the journal Cell, scientists have investigated the underlying genetic basis of leaf resemblance in Kallima butterflies, that are found in locations in east, south and southeast Asia. The study was focused on species found in montane and lowland biodiversity hotspots, including several islands to the south and east of the Asian mainland. By using butterflies from these diverse locations, the researchers hoped to access as many different patterns of leaf resemblance as possible, and to understand the evolution of this phenotypic diversity.

“Butterfly wings have relatively simple structures, but this simple structure is responsible for some very complex functions: locomotion, thermoregulation, mate preference, and predator avoidance,” said Wei Zhang, a butterfly researcher at Peking University in China. “Because these wings are structurally simple but functionally complex, I think butterfly wings are the ideal system to address multiple evolutionary questions.”

Next, the team analyzed the genomes of 36 butterflies from the genus Kallima, collected from 11 geographic locations in east and southeast Asia. This enabled the researchers to get an idea of the evolutionary history of this fascinating group of leaf mimics. The results suggest that this group of butterflies diversified in the eastern Himalayas during the Pleistocene Period, and subsequently dispersed to other regions in Asia, as well as to areas that are now islands.

The experts also sequenced the genomes of 78 individuals, all of the species K. inachus, that showed a range of different leaf patterns on their wings. By doing this, they hoped to reveal the genetic basis for the variety of different dead-leaf wing patterns found amongst this species. They were fascinated to find ten distinct leaf wing forms in total, which were most likely determined by combinations of five alleles (alternative gene forms) of the gene known as cortex. This gene is known to control wing and body color in various other moths and butterflies.

The five alleles were associated with underwing patterns that the researchers termed plain, veined, scrambled, rippled and moldy. They hypothesized that the ten distinct wing leaf patterns were likely the result of different combinations of these alleles. When this pattern of phenotypic variation exists within natural populations, it is often an indication that several different selection pressures act on the trait (lower wing pattern) and cause certain outcomes to be selected for because they increase the survival chances of individuals that carry them.

The researchers noted that Kallima butterflies have derived protection from resembling leaves for millions of years and that the variety of wing patterns found today are the result of evolutionary pressures on the cortex gene. The effects of the various selection pressures have resulted in balanced polymorphism, a state where the ten wing leaf patterns are all maintained in the butterfly populations today.

“This leaf wing polymorphism has been maintained in multiple Kallima species, but different species may have different phenotype frequencies,” explained Zhang. “I think this is due to the proliferation of specific plants in particular habitats, so the butterflies will gain more protective benefits by having different frequencies of wing phenotypes.”

The experimental method used by the team enabled them to investigate both the macroevolution and microevolution of leaf mimicry in oakleaf butterflies. “We generally focus on biodiversity at a macroevolutionary level,” said Zhang. “But we seldom have cases that illustrate in detail how species diversity and genetic diversity originated in such a diversity hotspot.”

In the future, Zhang and her team intend to examine how wing coloration and patterns vary in different regions and with different plant life. “We would like to understand how these genes facilitate, and originated, such beautiful diversifying wing patterns,” said Zhang