Hurricane intensity near Bermuda has doubled in 60 years • Earth.com 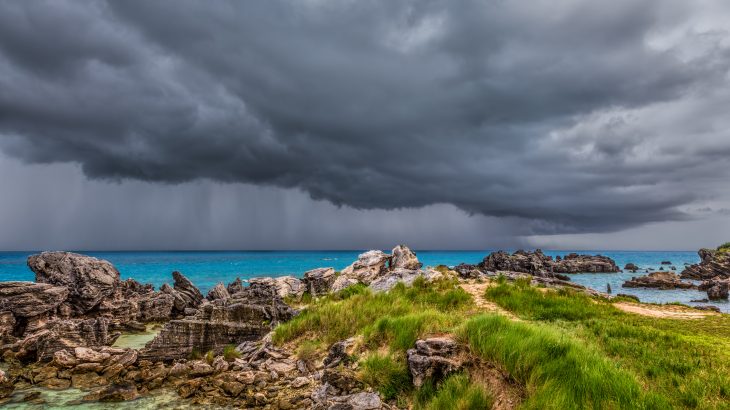 Hurricane intensity near Bermuda has doubled in 60 years

The maximum wind speeds of hurricanes near Bermuda have more than doubled over the last six decades as a result of rising ocean temperatures, according to a new study from the University of Southampton. Hurricanes pull energy from the ocean’s surface, and warmer waters are now fueling more intense storms.

The researchers determined that between 1955 and 2019, the average hurricane intensity near Bermuda increased from 35 to 73 miles per hour. This is equivalent to an increase of more than six miles per hour each decade. Meanwhile, the surface and subsurface temperatures in the region heated by up to 1.1 degrees Celsius.

Based on the average upper ocean temperature in the top 50 meters of the Atlantic Ocean, the experts developed a method for predicting the intensity of hurricanes near Bermuda.

“The approach we used could provide a better way to predict Bermuda storm intensity than current theory or operational methods alone,” explained study lead author Samantha Hallam. “It could also be use elsewhere in the subtropical Atlantic where there is a shallow mixed layer depth, typically north of twenty five degrees north.”

“We used hurricane potential intensity theory, locally-based weather balloon soundings, surface and upper ocean observations of conditions in and around hurricanes passing within 100km of Bermuda over the last 65 years (including direct hits and ‘near-miss’ storms).”

The researchers conducted a statistical analysis on hurricane paths within 100 kilometers of Bermuda over the last 60 years. Surface and subsurface ocean temperature observations were obtained from the Bermuda Atlantic Times Series (BATS) Hydrostation S program.

“Preliminary testing with the recent passage of Hurricane Paulette shows promising results that this technique could be further developed into an additional operational tool for forecasters locally.”

By improving predictions of wind speeds from hurricanes, experts can determine the necessary level of response in advance of the storm and potentially mitigate some of the destructive impacts.