Hyenas make faces when they want to play fight • Earth.com 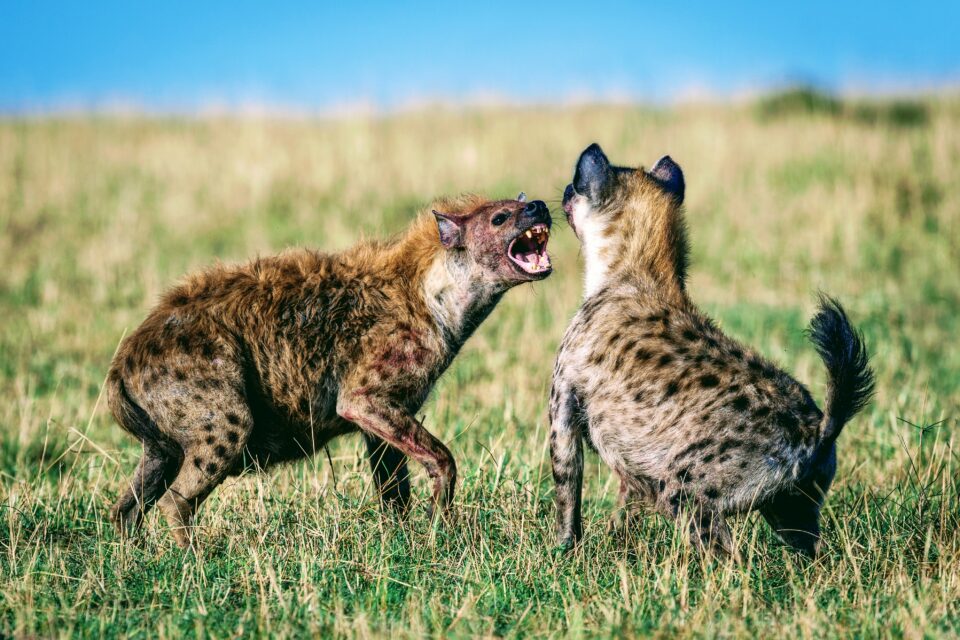 A new study reveals that both adult and juvenile hyenas often play fight with each other, using subtle body language cues to communicate to their opponent that the attacks are playful rather than dangerous. Researchers at the University of Pisa analyzed the behavior of 24 wild spotted hyenas (Crocuta crocuta) on a nature reserve in South Africa.

By analyzing 38 hours of footage of hyenas from the Greater Makalali Private Game Reserve near Limpopo, South Africa, evolutionary biologist Elisabetta Palagi and her colleagues discovered that hyenas rely on visual communication in order to fine-tune their playful interactions.

“It seems that if I want to play hard, I need signals to clarify that I am not attacking you – and that this is only play,” explained Dr. Palagi.

One of these cues is a relaxed, open mouth, resembling laughter, which also occurs in animals such as chimps, bears, dogs, or seals when they play fight. Another is head bobbing, a body language cue also signifying that the hyenas’ behavior should be taken to be playful rather than aggressive.

Regardless of which body language cues they used, the animals always made sure that the opponents were watching them before they made it. This suggests that playmates were highly attentive to each other’s facial expressions and bodily gestures, and were capable of correctly interpreting them.

Additionally, the scientists found that the relaxed open mouth punctuated the play-fighting session at a higher frequency when the offensive patterns were biased towards one of the two players. This stands in contrast with the play behavior of most other animals, who tend to stop play fighting when one of them is clearly winning. Hyenas’ play-fighting sessions are thus longer and more complex than in the case of other species.

By using subtle body cues and facial expressions, the hyenas are able to exchange crucial information regarding the nature of their interaction.

According to the study authors, “spotted hyenas are highly competent and fast in processing facial displays of different nature to correctly ‘read others’ intentions’ and respond with appropriate motor actions to avoid misunderstanding during one of the most multifaceted and risky social interaction.”

The studies were published in the journals Animal Behaviour and Current Zoology.