Is the Icelandic volcano Katla about to erupt? • Earth.com 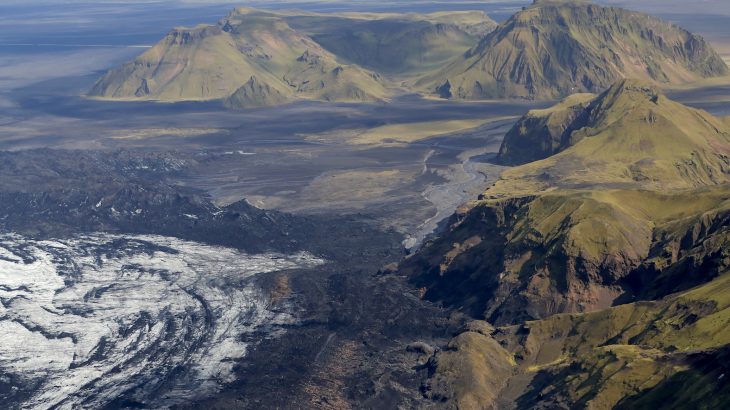 Is the Icelandic volcano Katla about to erupt?

Over the past several days, the highly active Icelandic volcano Katla has received considerable media attention questioning whether or not an eruption is imminent.

However, it turns out that many have misunderstood the results of a new study that found that Katla is emitting huge quantities of CO2, which can be a precursor to an eruption event.

Researchers from Leeds University recently conducted the pioneering study examining CO2 emissions of the volcano, and the results could help with predicting volcanic eruptions in the future.

The study was published in the journal Geophysical Research Letters and it’s one of the few to measure CO2 emissions from a volcano covered by glacial ice, which Katla is.

Katla, which means Kettle, is one of Iceland’s most active and largest volcanos with a history of erupting twice per century, although by those standards the volcano is now long overdue for its next eruption.

Part of what makes Katla so interesting and difficult to study is that it’s partially buried under a glacier and the last eruption to break through its glacial cap occurred in 1918.

Although volcanoes are a key source of CO2 emissions and a volcanic eruption of Katla would have a major impact on a global scale, emitting high ash plumes and potential tidal waves, it was previously assumed that Katla was a minor gas emitter according to the study.

What the researchers discovered was that not only is Katla not a minor emitter of CO2, Katla is responsible for up to four percent of all global non-erupting volcanic emissions.

In other words, Katla is one of the largest volcanic sources of CO2 on Earth.

While some media outlets have misinterpreted the study as pointing to an imminent eruption because the CO2 measurement could indicate that the volcano’s magma chamber is quickly filling up, the researchers and other volcano experts say otherwise.

“There is no way of telling when it will erupt, just that it will,” Sarah Barsotti, co-ordinator for volcanic hazards at the Icelandic Meteorological Office, told the Sunday Times.

The lead author of the study, Dr. Evgenia Ilyinskaya of the University of Leeds, took to Twitter to clear up the confusion:

“Our new study on Katla #volcano in Iceland has received significant interest of the #media, which is great,” she tweeted. “However, an unwanted side effect is that the media can misrepresent and exaggerate scientific results. In our study, we discovered something extraordinary and unexpected about Katla. But we did NOT show whether or not it is building up to an #eruption.”

Iceland’s Institute for Earth Sciences recently released a statement on their Facebook page stating that the new research does not actually predict any future eruptions, but the study is no less noteworthy.

But the research could help with predicting volcanic eruptions in the future and adds to our understanding of volcanic CO2 emissions.