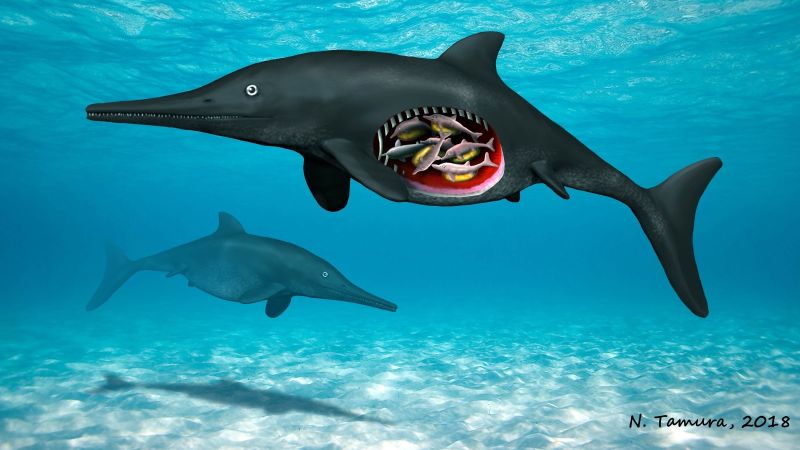 Eight fossilized embryos have been discovered in a pregnant ichthyosaur fossil that was first found in 2011, revealing that these reptiles gave birth to live offspring instead of laying eggs.

The embryos are so tiny that at first, the researchers were unsure if they were embryos or just the remnants of the aquatic reptile’s stomach contents, but the tiny spinal chords are unmistakable.

The discovery could help other paleontologists better identify fossil embryos and sheds light on the way ichthyosaurs gave birth over a hundred million years ago.

Ichthyosaurs first appeared in the Triassic period and were one of the most dominant predators in the Jurassic period. Sometimes mistaken for water dinosaurs, the ichthyosaur was around long before the dinosaurs first made an appearance.

Reaching lengths of 10 to 20 feet and made for speed, the reptile was a force to reckoned with. It’s thought that the ichthyosaur could reach speeds of 22 miles per hour.

The newly discovered embryos show that the reptiles didn’t lay eggs and instead had live births. In fact, the species were aquatic through and through, not needing to go to land even to breed.

This specimen was found in Yorkshire, England, in an area rich with Jurassic fossils, including other ichthyosaurs and different marine reptile species.

However, this is the first time paleontologists excavating in the area have been faced with such robust evidence of fossil embryos.

Palaeontologists Mike Boyd and Dean Lomax from the University of Manchester examined the fossil and discussed their incredible findings with the Daily Mail.

“The female would have probably have been around three meters [ten-feet] long,” said Lomax. “Of the adult, we have just a few parts of the backbone, some ribs and between them individual strings of vertebrae which are the embryos. It is also the youngest known pregnant specimen and the first found in Yorkshire.”

The fossil and its eight embryos are now on display in Yorkshire’s Jurassic World.

“This is an incredible find and the research by Dean and Mike has helped us confirm it is the first example of fossilised ichthyosaur embryos to be found in Yorkshire,” Sarah King, the curator of Natural Science at the Yorkshire Museum, told Daily Mail.  “It also allows us to show a softer and more nurturing side to the Sea Dragons which were the top marine predator of their time.”
—