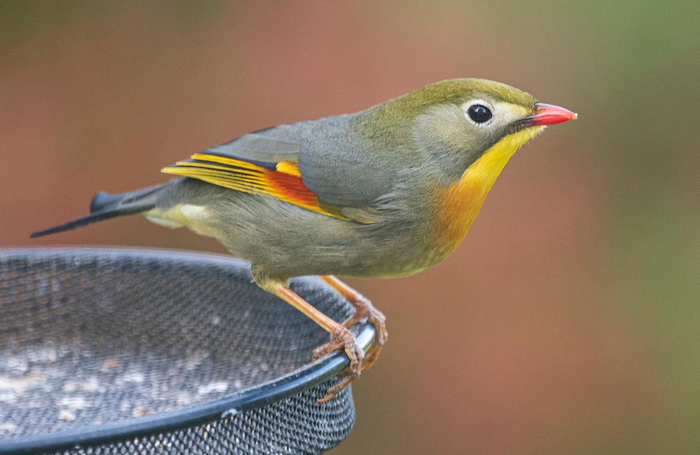 A noisy songbird from subtropical Asia could soon dominate the morning chorus of native warblers, robins, and blackbirds in Britain, according to a new study led by UK Centre for Ecology & Hydrology (UKCEH). The experts report that the red-billed leiothrix could become as familiar in Britain as ring-necked parakeets, whose numbers have risen rapidly in the UK in recent decades.

The red-billed leiothrix has already become established in several other parts of Europe, and recent sightings in Britain indicate that the species is gaining momentum there as well.

The leiothrix sings a song that is similar to that of blackbirds and robins. Just like parakeets, the non-native birds are kept as pets and have either escaped or been released into the wild.

“If the red-billed leiothrix becomes established in Britain, they could soon be a familiar sight in our gardens, parks and woodland, with their rich song altering the dawn chorus as we know it today,” said Dr Richard Broughton, who led the study.

“Our study is the very first assessment of this species in Britain, and raises awareness of the fact that the birds have been sighted in Britain. The potential for the red-billed leiothrix to become established here had seemed very low, but the cluster of records in southern England suggest we need to take it seriously as a potentially new invasive species.”

According to the researchers, milder winters as a result of climate change will make it easier for the red-billed leiothrix to become established throughout Britain. Native to southern China and the Himalayas, the species already has a strong presence in France, Spain, Portugal, Italy, Japan and Hawaii.

While the invasive birds may pose a threat to native species through competition for food, further research is needed to investigate the potential long-term effects.

Dr. Broughton said that monitoring of the red-billed leiothrix in Britain will be crucial in determining its prevalence in this country, and has asked the public to report sightings via the British Trust for Ornithology’s BirdTrack app or the iRecord app.