Jumping spiders know the difference between animals and objects • Earth.com 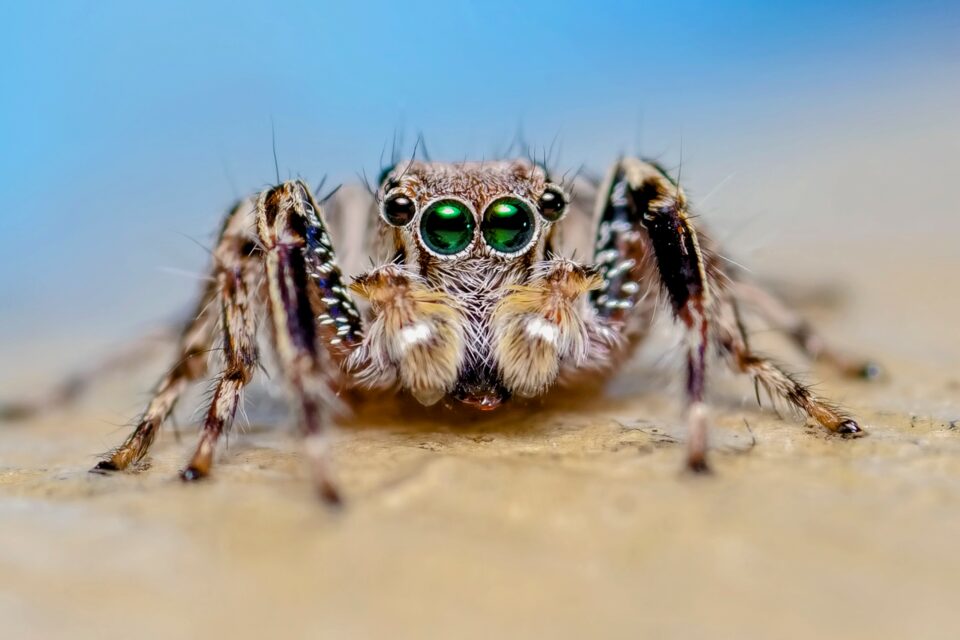 Jumping spiders know the difference between animals and objects

A new study published by PLOS looks at the ability of jumping spiders to use their peripheral vision to distinguish between objects and living creatures.

Being able to detect other animals allows the finding of mates, stalking of prey, and the avoidance of predators. Animals betray a pattern of movement because of their jointed limbs across vertebrates and many invertebrates.

Scientists have known for a long time that most vertebrates can quickly notice this pattern. Now, the experts report, jumping spiders have proven their own ability to notice other animals in their surroundings.

To come to this conclusion, the researchers caught and partially restrained 60 jumping spiders (Menemerus semilimbatus) on a round treadmill. On either side of the treadmill, video screens flashed patterns of light that were only visible to outside eyes. Some of the patterns were random, while others mimicked movement patterns of animals.

The results showed that the spiders were more likely to turn and face the random patterns than those showing animal movement patterns.

It may seem counterintuitive that the spiders would prefer to face the random patterns, but the researchers explain that the spiders do this to focus their other eyes on a movement they don’t recognize and investigate, rather than watch organismal movement that they do recognize.

The research says a lot about the evolution of sight in general as well, since this ability was only known of in vertebrates previously. The scientists are excited to see what other secrets jumping spiders may be hiding.

“Jumping spiders’ secondary eyes confirm themselves to be a marvelous tool,” said study lead author Massimo De Agrò of Harvard University. “In this experiment, we observed how they alone can tell apart living from non-living organisms, using the semi-rigid pattern of motion that characterize the formers and without the aid of any shape cue.”

“Finding the presence of this skill, previously known only in vertebrates, opens up new and exciting perspectives on the evolution of visual perception. My co-authors and I can’t wait to see what other visual cues can be perceived and understood by these tiny creatures.”

The study is published in the journal Plos Biology.