Jurassic water bugs stuck their eggs on their legs • Earth.com 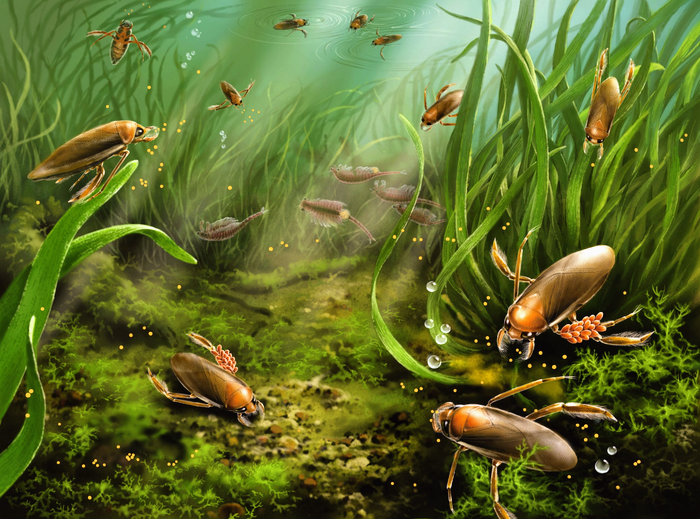 Jurassic water bugs stuck their eggs on their legs

Parental care is an important strategy for protecting offspring and enhancing their chances of survival. It has evolved independently many times in different groups of animals such as mammals, birds, reptiles and arthropods. Parental care is particularly evident in many modern social insects, including bees, wasps and ants. But finding evidence of parental care among fossil organisms is extremely challenging because of the temporary nature of brooding activity.

In a new study led by Professor HUANG Diying from the Nanjing Institute of Geology and Palaeontology of the Chinese Academy of Sciences (NIGPAS), researchers have found the oldest evidence of brood care in an insect, the extinct water boatman, Karataviella popovi. By examining 157 fossilized individuals of this aquatic bug that lived around 160 million years ago, the researchers identified 30 females, each carrying a cluster of eggs anchored to a left leg like a bunch of tiny grapes.

In their paper, published in the Proceedings of the Royal Society B, Biological Sciences, the authors state that these fossils are “exceptional” and show a unique brooding strategy that is unknown in any other extinct or extant insect species. The tiny eggs, each measuring between 1.14 and 1.20 millimeters, are arranged in densely packed rows and each egg is anchored by a tiny stalk to the mesotibia of the middle leg on the female’s left side. The five or six rows of eggs are staggered, with six to seven eggs per row. This represents quite a hefty load, considering that K. popovi adults only measure around 12 mm in length.

Researchers excavated the insect fossils from the Haifanggou Formation, a fossil-filled rock deposit near the village of Daohugou in northeastern China. A wide variety of fossils have already been recovered from the site, including the preserved remains of feathered dinosaurs, ancient mammals, giant fleas and long-proboscid scorpionflies.

Today, modern species of the water boatman are common aquatic insects that can be found in many freshwater ecosystems worldwide. Interestingly, females habitually lay their eggs on various subaquatic surfaces, such as leaves, stones, and the stems of vegetation. Eggs may also be deposited on the shells of snails, the carapaces of terrapins and the exoskeletons of crayfish. The researchers hypothesize that K. popovi females probably became adapted to carry eggs around on their own legs in Jurassic times in response to various pressures present in the environment of the time.

Eggs need to be oxygenated as the embryos develop, and it is possible that the large eggs of K. popovi needed extra aeration due to their relatively small surface area to volume ratio. In freshwater habitats that may have become stagnant at times, carrying the eggs around would have ensured maximal flow of oxygen over them as the female swam through the water.

In addition, such nutrient-rich eggs would have been attractive to all sorts of predators in the underwater environment, especially if they had simply been deposited on available surfaces. Depositing the eggs onto the females’ own legs would have provided them with protection and enhanced their survival rate.

The researchers hypothesized that K. popovi females likely laid the eggs directly onto their legs by first secreting a sticky mucus and then executing “specific bending movements of the abdomen” to cement the eggs onto the appropriate limb. “The unoccupied right mesotibia might have been used to maintain balance when swimming and feeding,” they wrote in their report. This unusual brooding strategy likely provided effective protection for eggs by largely avoiding the risks of predation, desiccation and hypoxia.

The researchers explained that carrying a cluster of eggs on a leg is probably a unique strategy among insects. However, it is not unusual in aquatic arthropods, where such carrying behavior can be traced back to the early Cambrian Chengjiang Biota.

The water boatman fossils in the current study were dated at 163.5 million years old, which places them in the middle of the Jurassic Period (201.3 million to 145.5 million years ago). The evidence of brood care in K. popovi is thus the earliest for any insect, pre-dating other fossil evidence of brooding behavior by around 40 million years. Among Mesozoic insects, the only other direct fossil cases of brooding behavior are from the Early Cretaceous Jehol Biota and mid-Cretaceous Burmese amber.

This discovery highlights the existence of diverse brooding strategies in Mesozoic insects, thus helping scientists understand the evolution and adaptive significance of parental care in insects.