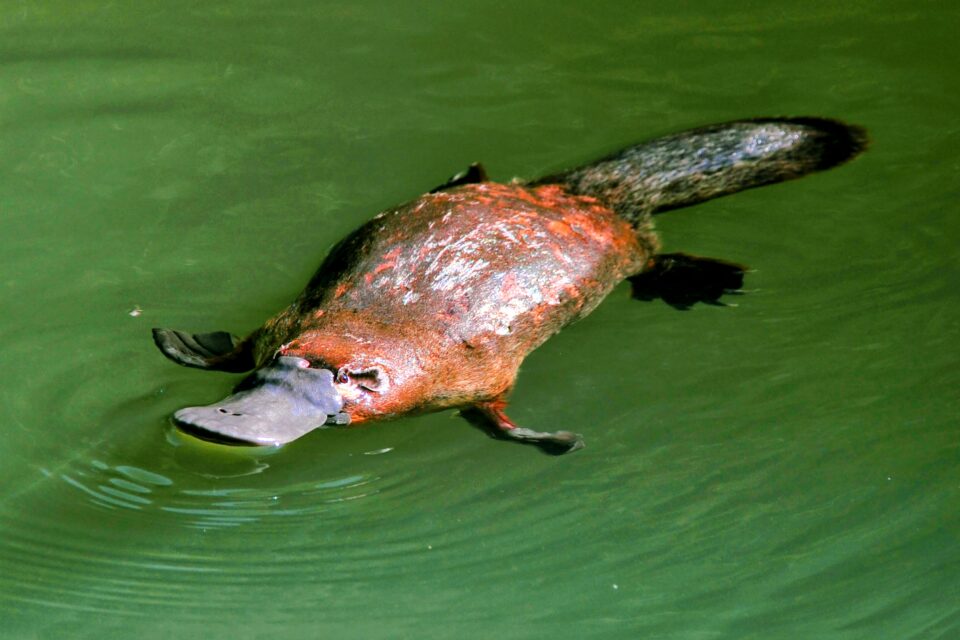 The elusive platypus is perhaps the most unusual mammal alive today. Apart from having a duck-like bill that senses the presence of prey using electrical currents in the water, it lays eggs like a bird but suckles its young on milk that seeps from a mammary patch. It is a monotreme, one of the most ancient branches of mammals, and is found only in eastern Australia where it inhabits fresh water creeks, slow-moving rivers, lakes joined by rivers, and artificial water storage sites, such as farm dams.

The species is listed as “near threatened” by the IUCN, and is thought to have undergone significant population declines in recent years due to several different human-mediated threats. Although platypuses spend most of their time in or near water, they do move over land in order to disperse and find more suitable habitats. In light of this, it has been proposed that the presence of large dams on rivers may have a detrimental effect on platypus populations because this may limit their movements, both upstream and downstream.

In Australia, 77 percent of all major dams are situated in regions where platypuses occur. These dams are predicted to represent barriers to dispersal, which then has potential long-term implications for gene flow, genetic variation and the ability to adapt to changing conditions. However, the extent to which dams actually restrict movements, and the genetic consequences of this, remain largely unquantified at present.

In a new study, published in Communications Biology, researchers from universities in Australia and the U.S. have examined the genetic makeup of platypuses in nine river systems in eastern Australia. In five of the rivers, major dams regulate the flow of water, whereas the remaining four rivers are free flowing and are not fragmented by large dams. These included the free-flowing Ovens River, along with the dammed Mitta-Mitta River, and the free-flowing Tenterfield Creek, along with the nearby Severn River regulated by a large dam.

The study found that large dams are significant barriers to platypus movements. This was reflected in the greater genetic differentiation between platypus populations above and below large dams than between populations along rivers without dams. Importantly, the extent of this genetic differentiation was greater where dams had been in existence for longer, reflecting the long-term impacts of restricting gene flow between populations.

“We extracted the DNA from the blood collected by our Platypus Conservation Initiative researchers at UNSW. By using thousands of molecular markers, we were able to identify a strong signal indicating that genetic differentiation increased rapidly between platypuses below and above these large dams,” said study lead author Dr. Luis Mijangos, who is now at the University of Canberra.

“This is a profound result with significant implications for platypus conservation. We’ve long suspected that prey can restrict platypus movements, but this is the ‘smoking gun.’ These animals just can’t get around big dams,” said study co-author Professor Richard Kingsford, Director of the UNSW Centre for Ecosystem Science.

Despite the fact that platypuses can walk substantial distances over land, the results of this study indicate that they cannot overcome high dam walls. In addition, large, open water bodies typically found above dam walls, as well as regulated water flow areas below dam walls, are not suitable habitats for platypuses. Major dams thus restrict the movements of individuals along waterways and act as barriers separating populations.

As a consequence, major dams restrict the gene flow between platypus groups and therefore increase the possibility of inbreeding and the loss of adaptive genetic variation, reduce the chances of recolonizing areas where local extinctions have occurred and the likelihood of dispersing to areas with more suitable conditions. All these factors, along with reduced habitat quality due to climate change, are expected to lower the long-term viability of platypus populations.

“We know that platypuses are declining in many parts of their range in eastern Australia, affected by many threats. This study identifies one of the main threats to this iconic species,” said study co-author Dr. Gilad Bino, leader of the Platypus Conservation Initiative at UNSW Sydney. “There is still much we don’t know about the ecology of the platypus, but given its international status as a monotreme, it is increasingly vital that we understand and manage the threats to this unique species.”