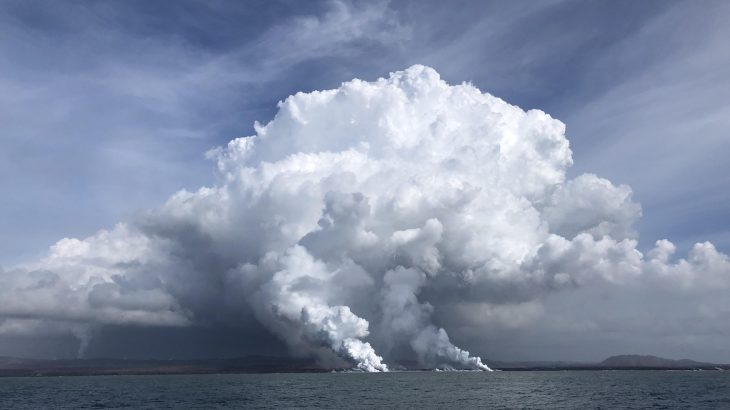 The 2018 Kilauea Volcano eruption resulted in millions of cubic feet of molten lava falling into the sea.

When the lava made its way into the nutrient-poor waters off Big Island, it led to massive phytoplankton blooms, and now researchers from the University of Hawai’i (UH) at Mānoa and University of Southern California know why.

When Kilauea injected tons of lava into the water, nutrient levels spiked resulting in microbe blooms that were so big they could be seen from space.

What’s surprising is that the phytoplankton blooms depended on nitrate but there is very little nitrogen in basaltic lava and not nearly enough to explain the sudden blooms.

The researchers discovered that when the lava fell into the ocean, it quickly warmed up nutrient-rich deep water which rose to the surface, providing a rich feast for microbes.

For the study, the researchers conducted an expedition during the peak of Kilauea’s eruption. The team monitored the lava’s entry into the water 24/7 and tested the water chemistry.

At first, the researchers hypothesized that lava and volcanic dust were helping microorganisms that need phosphate and iron, both of which are found in lava.

However, these nutrients were unavailable to microbes, but heated deep water was rising to the surface, bringing with it nitrate concentrations.

“The expedition in July 2018 provided a unique opportunity to see first-hand how a massive input of external nutrients alters marine ecosystems that are finely attuned to low-nutrient conditions,” said Sam Wilson, a co-lead author of the study.

The very same interactions observed in this study may have been responsible for past ocean fertilization events linked to the formation of Hawaii’s islands.

“Ecosystem responses to such a substantial addition of nutrients are rarely observed or sampled in real time,” said Wilson. “UH has a strong tradition of not only volcanic research, but also looking at its impacts on the surrounding environment such as the ocean, groundwater, atmosphere. This latest piece of research improves our understanding of lava-seawater interactions within the much broader context of land-ocean connections.”