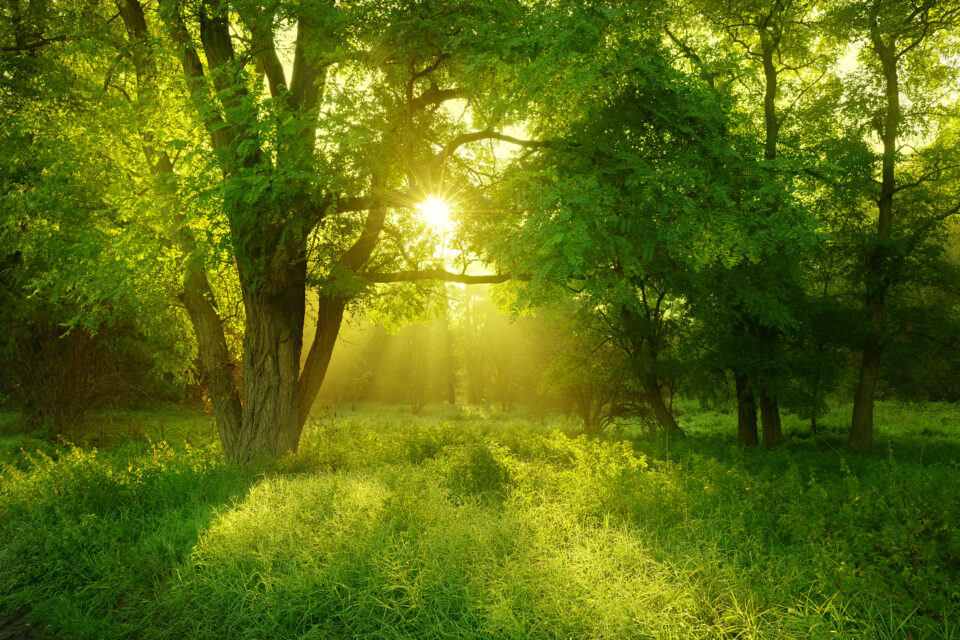 Clearing lands for agriculture can have negative implications for climate change. The removal of trees reduces the amount of carbon stored as biomass in the trees, as well as decreasing the amount of carbon dioxide removed from the atmosphere by photosynthesis. This means that carbon dioxide levels in the atmosphere increase when forests are cleared to make way for pastures. This is particularly severe when the forests are burned as part of the change in land use.

Researchers at the University of New Hampshire have now conducted a study to test whether leaving some trees behind when temperate forests are cleared in the northeastern United States can reduce some of the negative climate consequences. In the practice of silvopasture, trees are intentionally left behind in pastures where livestock graze. In addition, the stumps of trees that have been removed may also be left standing, increasing the amount of carbon remaining in the fields.

“We talked to a lot of farmers in the Northeast who are interested in the silvopasture approach but there aren’t a lot of data to help guide them through implementation, and responsible and strategic management,” said Alexandra Contosta, research assistant professor at UNH’s Earth Systems Research Center. “We wanted to see if silvopastures made a difference and found that there are benefits to this approach that could help both the farmer and the planet.”

The researchers set up experimental land plots in two locations, in New Hampshire and New York. In both locations, forests have regenerated following a period of forest clearing, intensive agricultural management, and subsequent farm abandonment, such that secondary forests currently comprise 60–80 percent of the land base. In both experiments, they hypothesized that, compared to managed cool-season pasture, forest conversion to silvopasture would moderate changes in surface temperature, soil greenhouse gas emissions, as well as in soil carbon and nutrient losses.

At both locations, land was divided into three plots (also called treatments); one plot was covered with secondary forest, one plot was cleared of forest and open pasture was planted, and in the third plot, silvopasture was established. In this last experimental treatment, trees were thinned by 50 to 60 percent and tree stumps were left in place. Orchard grass, white clover and other forage species were planted, after which either dairy or beef cows were introduced.

The researchers set up meteorological stations in each of the experimental areas, and monitored emissions of the greenhouse gases carbon dioxide and nitrous oxide. They also measured soil temperature and moisture, as well as the carbon and nitrogen contents of the soil.

The results, published in the journal Agriculture, Ecosystems & Environment, revealed that near-surface air and soil temperatures were highest in the converted pasture plots, lowest in secondary forest areas, and intermediate in the converted silvopasture treatment. Soil carbon dioxide levels showed a similar trend, with elevated soil CO2 in open pastures and lower levels in secondary forests and converted silvopasture treatments. They did not find any differences in carbon storage in the soil between different land use treatments.

Compared to a completely cleared, tree-less, open pasture, the integrated silvopasture treatment released lower levels of carbon dioxide and nitrous oxide, thus offering a possible alternative for farmers who are concerned about the climate consequences of land use change.

According to the researchers their findings suggest that silvopasture may offer a biogeochemical “middle ground” between intact secondary forests and managed open fields, retaining the climate benefits of forests while enabling expansion of the agricultural land base.

They feel it is important to understand the climate impacts of forest conversion to open pasture or silvopasture in order to anticipate the climate consequences of potential future land use practices, both across the northeastern US and in other temperate forest regions globally.

“New England has a lot of trees which can reduce our options for agriculture and our ability to produce our own food,” said Contosta. “So, what is exciting about this study is that it shows silvopasture could be a viable alternative that is also more climate conscious.”