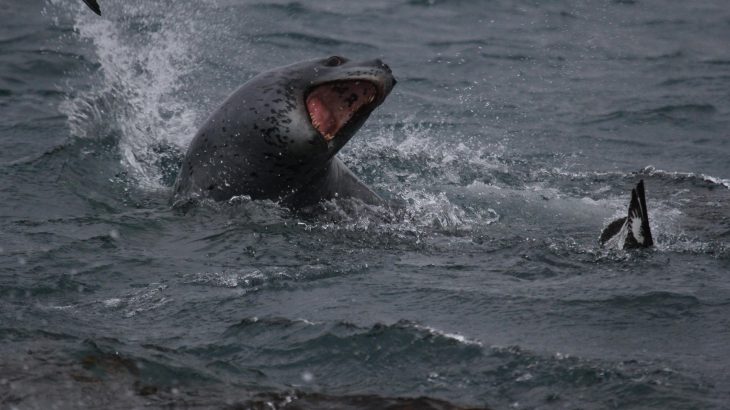 Leopard seals, one of the largest species of seal in the world, are long, sleek predators at the top of the food chain in Antarctica.

Leopard seals have been filmed in several curious and playful encounters with divers on Antarctic expeditions, but they have never before been captured sharing food with other seals.

Leopard seals are largely considered solitary and do not spend much time with other leopard seals. Occasionally leopard seals have been found hunting together, but these instances are few and far between.

Never before seen footage from the Netflix series Our Planet appears to show leopard seals sharing a penguin meal.

First filmed in October 2016, in St. Andrews Bay and Right Whale Bay, the footage was captured by the production company Silverback Films which produced Our Planet.

The footage was not featured in the six-part documentary, but researchers from Plymouth University in the UK, the British Antarctic Survey, Monash University in Australia, and the Shallow Marine Surveys Group of the Falkland Islands analyzed the unseen film in a new study.

Drones from Silverback Films reportedly captured up to 36 seals feeding at a penguin colony on South Georgia Island.

The footage even shows two seals feasting on the same penguin carcass, something never before seen in the wild.

James Robbins, the leader of the study, notes that the film sheds light on the behaviors of leopard seals.

“The footage provided by Our Planet film crews has given us an exciting new insight into the behaviour and lives of leopard seals,” said Robbins. “There is still so much that we don’t understand about these predators as they live in remote areas of the Antarctic and are often seen alone on an inaccessible iceberg. But I’ve personally had over 500 encounters with leopard seals and have never seen two animals being so tolerant of each other.”

The researchers can’t say with complete certainty that the footage shows two seals sharing food. Instead, the footage could show a rare example of being forced to concede to another competitor so as not to lose a potential meal.

Rather than risk having a meal stolen, the seals may be allowing some of their food to be eaten to save energy and keep most of their prey.

The study, published in the journal Polar Biology, shows how new technologies like drone footage can offer researchers an up close and personal look at the remote wilderness that is Antarctica.

“This study also provides a great example of how new technology is helping researchers to make close-hand observations of wild animals,” said David Hocking, a co-author of the study. “By using a camera drone, the filmmakers were able to fly above the animals without disturbing them, revealing detailed behaviours that otherwise may have gone unnoticed to shore-based observers.”