Lone dolphin may have adapted to communicate with local porpoises • Earth.com 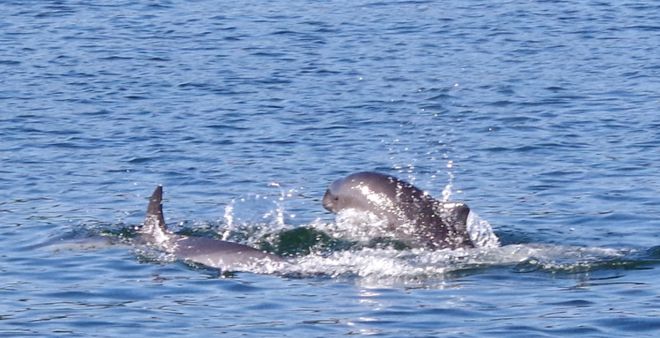 Lone dolphin may have adapted to communicate with local porpoises

A lone dolphin that has made his home around a buoy in the Firth of Clyde in Scotland may have found a way to talk to local harbor porpoises. Dolphins are not commonly found in the area, but Kylie, as the dolphin has been nicknamed by locals, has been living there for some time.

It’s suspected that Kylie got lost from his group and now new research shows that the dolphin may be altering its speech frequencies to match the local populations of harbor porpoises, according to The Telegraph.

Mel Cosentino, a Ph.D. research student from the University of Strathclyde, is the one responsible for the new findings.

If Cosentino’s findings are verified, it would be the first example of a common dolphin imitating other species so as to communicate with them.

“Several cetacean species, such as bottlenose dolphins, belugas, and killer whales, have the ability to change their acoustic repertoire as a result of interactions with other species,” Cosentino told The Telegraph. “This vocal learning ability has mainly been observed in captive individuals and few cases have been reported for wild cetaceans.”

Common dolphins have frequencies that peak at 100 kilohertz and harbor porpoises have a higher peak at 130 kilohertz.

Cosentino analyzed audio recordings of Kylie when he was nearby harbor porpoises and discovered that the dolphin produced clicks that had higher frequencies to better match and possibly communicate with the porpoises.

More research is needed in order to confirm that Kylie is imitating harbor porpoises, but it would be a novel discovery if proved true.

“If further analysis shows this to be the case, it would be the first time a common dolphin, either in captivity or the wild, has demonstrated an ability for production learning, where it has learned to imitate another species,” Cosentino said.