Some male hummingbirds have beaks shaped perfectly for fighting • Earth.com 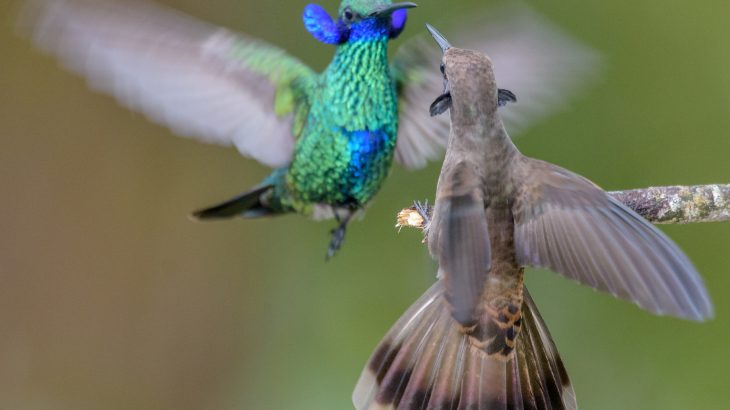 Some male hummingbirds have beaks shaped perfectly for fighting

Hummingbirds are always on the fast hunt for food. Their specially designed long bills and tongues have evolved to dip into flowers and lap up nectar.

Because hummingbirds are so active, they need a considerable of fuel to help support their energetic lifestyle, and the perfect bill shape provides a great advantage for maximum feeding efficiency.

But in South America, some male hummingbirds have lost their feeding advantage and instead evolved bills with teeth and hooks for fighting, according to researchers from the University of California, Berkeley.

It’s an interesting tradeoff, and for the first time, researchers were able to capture hummingbirds fighting, pinching, fencing, and poking with their bills with slow-motion cameras as male birds defended their prime feeding spots.

A paper detailing these observations of South American hummingbirds was published in the journal Integrative Organismal Biology.

“We understand hummingbirds’ lives as being all about drinking efficiently from flowers, but then suddenly we see these weird morphologies – stiff bills, hooks and serrations like teeth – that don’t make any sense in terms of nectar collection efficiency,” said Alejandro Rico-Guevara, the lead scientist on the project. “Looking at these bizarre bill tips, you would never expect that they’re from a hummingbird or that they would be useful to squeeze the tongue.”

In this new paper, Rico-Guevara, who has been photographing hummingbirds for over a decade, reported on his past observations and what he learned about beak evolution.

The paper discusses the intricacies of the hummingbird’s forked tongue and how it helps the bird easily trap and lap up nectar.

“Extracting nectar is what fuels their lives,” said Rico-Guevara, going onto explain that hummingbirds have developed “very flexible bills with very soft edges, soft, blunt bill tips that are concave, like a couple of spoons, that perfectly match the tongue to squeeze out the last drop of nectar. All of these traits make a good seal between the tongue tips that actually enhances the efficiency of nectar extraction.”

Some flowers and hummingbirds have evolved in tandem and the shape of the flower ensures that only certain hummingbirds can access the sweet sugary nectar and also that the flowers are pollinated.

Straight and stiff bills, though, are better for poking, and birds with straight beaks have to feed at flowers that will fit their bill.

Rico-Guevara and researchers from Berkeley captured slow-motion video of male birds with hooked bills and sharp serrations as they fought and pinched other birds viewed as competition.

The videos show that hard long bills are good for poking, and hooked bills are perfect for pinching and snatching away feathers.

As effective as these new bill designs are for warding off other competing males, the bills do give male hummingbirds a definite disadvantage when it comes to feeding, which leads researchers to wonder how the tradeoff was made.

“We have discovered that these traits may be related to a different kind of strategy: instead of feeding on a particular flower shape very well, some birds try to exclude everybody from a patch of flowers, even though they can’t feed as well on them as hummingbirds without bill weapons,” Rico-Guevara said. “If you are good enough at keeping your competitors away, then it doesn’t matter how well you use the resources in the flowers you are defending, you have them all to yourself.”

The researchers plan to continue studying these unique bill design and to see how beak shape influences feeding and mating strategies in Latin America.
—