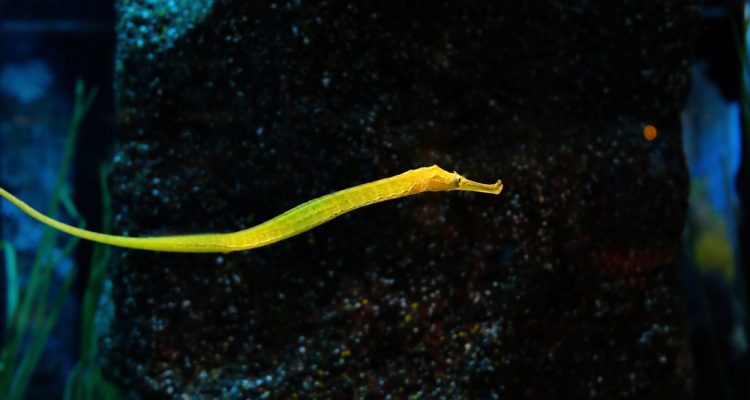 In a role reversal, it’s female pipefish who do all the work of competing for a mate. And male pipefish? They get pregnant.

That role reversal is rare in the animal kingdom, and it has scientists fascinated.

Male pipefish, like seahorses, sea dragons, and other fish in the Syngnathidae family, are among a very small number of species where the male, not the female, carries the young to term.

For all of these fish, the females still produce the eggs. But they transfer their clutch to a specialized brood pouch on the males. Then, the males carry the eggs to term, often sharing nutrients.

“From a research standpoint, pipefish are interesting because of the unique opportunity they provide to study sexual selection in reverse, which can tell us a lot about how variation works in mating and reproductive success,” Dr. Sarah Flanagan said in a press release. Flanagan is a postdoctoral fellow at the National Institute for Mathematical and Biological Synthesis.

The reversal of roles has led to a reversal of the typical sex characteristics seen in the wild. Female pipefish are the flashier members of the species, sometimes with more colorful ornamentation. They’re the ones who have to compete for males, who prefer larger females that produce more eggs.

But in a new study led by Flanagan, a team of researchers from the U.S. and Sweden found that when it comes to courting, it’s not just about what males want.

Females have some input, too, and size matters. The team, which looked at broad-nosed pipefish, found that larger male pipefish carry more eggs and produce healthier offspring. Those offspring are better survivors, too, and that makes large males much more desirable for the females.

“Our results show that larger males mate earlier than smaller males and that pregnant males have higher measures of condition compared to non-pregnant males,” the researchers wrote.

Males that breed earlier can also carry more pregnancies over the course of the breeding season, the team noted.

“This study shows that there are many factors at play in this system, more than perhaps we ever realized, but it’s that variation in traits and fitness which allows for sexual selection to work,” Flanagan said.

She plans to extend the research, looking into how pipefish genetics play a role in their reproductive behavior.

The study was published in the journal Behavioral Ecology and Sociobiology.