Mammoths were wiped out by climate change, not humans • Earth.com 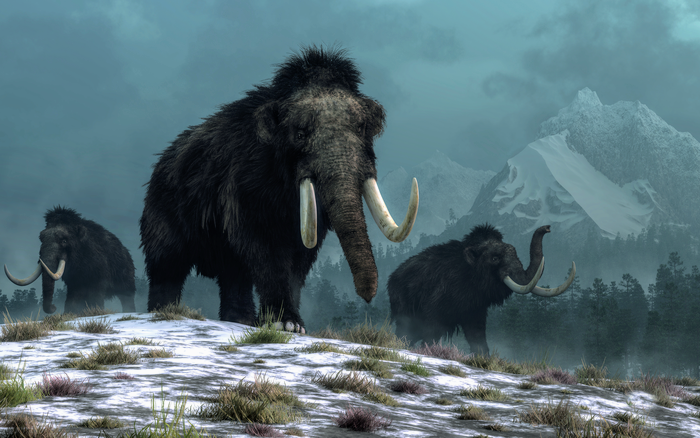 Mammoths, the woolly cousins of today’s elephants, roamed the Earth for over five million years before they mysteriously vanished about 4,000 years ago. A new study led by the University of Cambridge has found that the cause of their extinction was not humans, as previously thought, but climate change.

Mammoths lived alongside early humans and were regularly hunted by hominids for food and clothing. Moreover, the animals’ skeletons were used to build shelters and various tools and instruments, ranging from harpoons to flutes.

“Scientists have argued for 100 years about why mammoths went extinct. Humans have been blamed because the animals had survived for millions of years without climate change killing them off before, but when they lived alongside humans they didn’t last long and we were accused of hunting them to death,” said study leader Eske Willerslev, a fellow at the University of Cambridge’s St. John’s College. However, humans in fact lived over 2,000 years alongside mammoths, without causing their extinction.

By analyzing ancient DNA samples from plants and animal remains collected over a period of 20 years from sites in the Arctic where mammoths used to live, Professor Willerslev and his colleagues have found that, after the last Ice Age from late Pleistocene, the climate got wetter and the ice began to melt, leading to the formation of rivers, lakes, and marshes. These changes in the ecosystems significantly reduced the vegetation on which mammoths relied, including various types of grass, small shrubs, plants, and flowers, and made it impossible for them to survive.

“We have finally been able to prove was that it was not just the climate changing that was the problem, but the speed of it that was the final nail in the coffin – they were not able to adapt quickly enough when the landscape dramatically transformed and their food became scarce,” explained Professor Willerslev.

“This is a stark lesson from history and shows how unpredictable climate change is – once something is lost, there is no going back. Precipitation was the cause of the extinction of woolly mammoths through the changes to plants. The change happened so quickly that they could not adapt and evolve to survive,” he concluded.