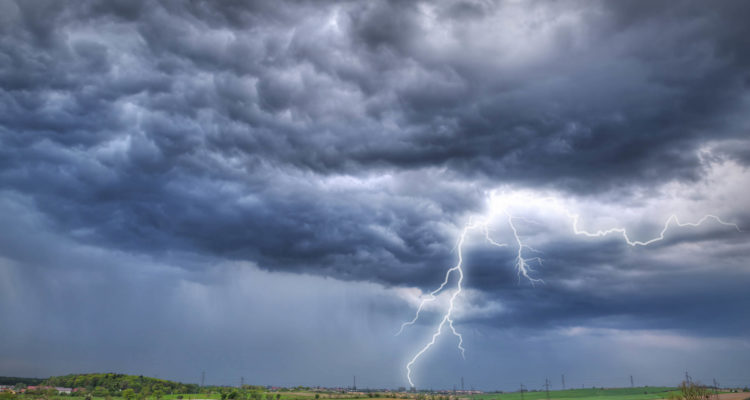 Byadmin
Earth.com staff writer
The effects of man-made climate change can hamper scientific projections of how key global weather patterns will act in the future, a new study has revealed.

The pivotal study, carried out by a team of international researchers, has shown that ‘multiple’ environmental influences can stymie predictions of how mid-latitude storms could behave.

Professor Mark Baldwin, Head of Mathematics at the University of Exeter and co-author of the paper said: “The study frames the important problem of what factors influence the paths of storms, and explores the possible future changes to storms and precipitation as climate changes.”

Specifically, the study looks at how a series of environmental forces such as enhanced surface warming in the Arctic – known as Arctic amplification – will impact the position of storm tracks. These are regions where storms travel from west to east across oceans and continents, driven by the prevailing jet stream.

The study suggests that there is a ‘tug of war’ between how these different environmental forces could change the position of the storm tracks.

Crucially, such major changes could significantly impact many of the most iconic cities worldwide – including New York, Chicago, London, Tokyo, Cape Town and Melbourne – because they shape temperature, precipitation and extreme weather.

The study, a review of the latest research in the field, is published in leading scientific journal Nature Geoscience.

In idealized and comprehensive climate model simulations, warming due to increased carbon dioxide concentration in the atmosphere leads the clouds in high latitudes to reflect more solar radiation – thereby cooling the earth’s surface in those regions and increasing the temperature gradient between the equator and the poles. In isolation (the amount of solar energy reaching the Earth’s surface) this would lead to a poleward shift of the storm tracks.

Meanwhile, those same clouds tend to enhance the greenhouse effect, thereby warming the Earth’s surface in those same regions and decreasing the temperature gradient between the equator and the poles, producing an opposite shift (also, in isolation).

Dr Tiffany S. Shaw, assistant professor in geophysical sciences at the University of Chicago and lead author of the paper added: “Changes in the position of storm tracks in response to anthropogenic climate change depend on how the equator-to-pole temperature gradient will change, and among the various factors affecting this gradient, cloud changes stand out as one of the important pieces of the puzzle.

Ultimately, any major changes in the position of storm tracks will have a significant impact on society because storm tracks shape temperature, precipitation, and extreme weather.

“The opposing cloud influences on the equator-to-pole gradient should be studied in more detail to understand the ultimate outcome of this ‘tug of war’ as it relates to the future position of the storm tracks,” Shaw said.

The researchers have now called for expanding observational efforts and the hierarchy of computer simulations used to understand how storm tracks will shift in response to the increased concentration of carbon dioxide in the atmosphere.

Such shifts in position have the potential to significantly change patterns of rain, snow, heat waves and cold outbreaks. For example, if storm tracks shift poleward, New York and Chicago will likely experience warmer weather and less snow. And there’s already evidence that the shift of the austral storm track southward – which was caused by the ozone hole at the South Pole -has impacted rain in Australia and South America.

The Nature Geoscience review article, titled Storm track processes and the opposing influences of climate change, grew out of a conference held last year in Grindelwald, Switzerland, that was sponsored by the National Science Foundation and The World Climate Research Program.