Migration of the North Atlantic jet stream will cause extreme weather • Earth.com 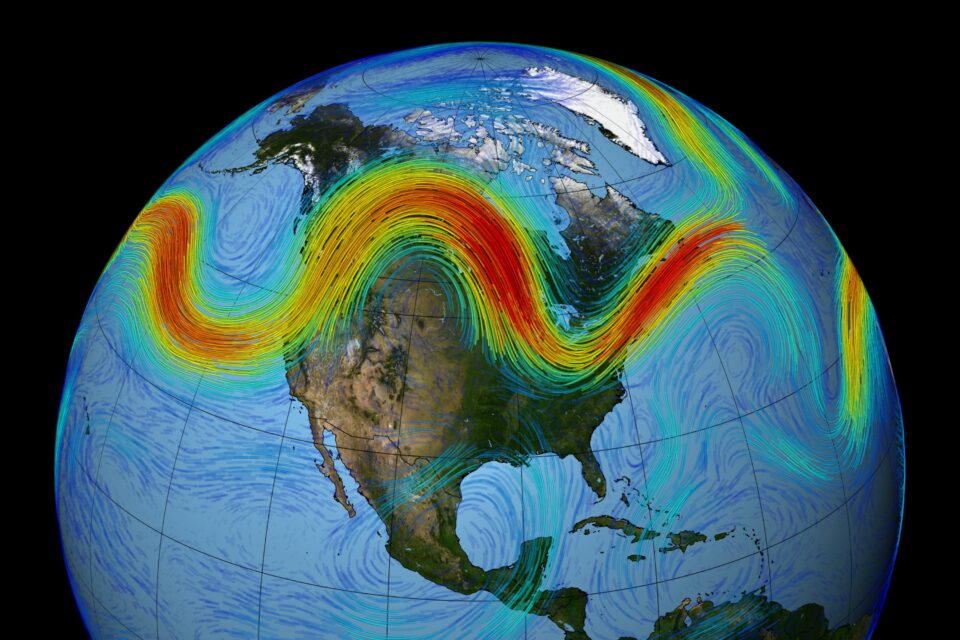 Migration of the North Atlantic jet stream will cause extreme weather

A recent study led by the University of Arizona found that the North Atlantic jet stream – a band of strong, westerly winds encircling the Arctic – could migrate north by 2060 due to climate change. This would lead to dramatic shifts in temperature and precipitation in Europe and North America.

The research team, led by climate scientist Matthew Osman, collected ice cores from nearly 50 sites across Greenland’s ice sheets to analyze how the layers of snow have been deposited over the last 1,250 years. The aim was to reconstruct the past locations and intensities of the North Atlantic jet stream, which plays a key role in weather conditions by causing between 10 and 50 percent of the variation in annual temperature and precipitation in eastern North American and western Europe.

“For most places on Earth, direct climate observations typically do not span more than a few decades. So, we haven’t had a great sense of how or why the jet stream changes over longer periods of time,” explained Dr. Osman.

“What we do know is that extraordinary variations in the jet stream can have severe societal implications – such as floods and droughts – due to its impacts on weather patterns. So, in terms of thinking about the future, we can now begin to use the past as a sort of prologue.”

By looking at the amount of snowfall deposited annually and the chemical constitution of the water molecules which made up each snow layer, Dr. Osman and his colleagues discovered that, until now, fluctuations in the jet stream’s intensity and position have been within the limits of natural variation. However, they estimate that, if global warming continues at a similar pace, the jet stream will soon migrate northwards.

“Such variations have huge implications on the types of weather that people might experience at a given place,” said Dr Osman.

“For example, when the jet stream is situated further south, the normally dry Iberian Peninsula tends to experience milder, moister conditions. But, as the jet stream migrates northward, much of that moisture also moves away from Iberia towards already-wet regions of Scandinavia.”

If the jet stream moves towards the north in the following decades, both Europe and North America could face more extreme weather like floods, droughts, and heatwaves. “Our results serve as a warning,” concluded Dr. Osman.