The miniaturization of tools is a specifically human trait • Earth.com 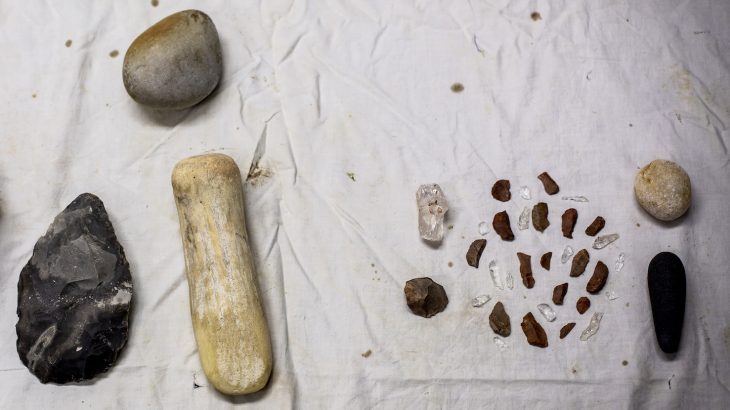 The miniaturization of tools is a specifically human trait

Scientists have widely agreed that tool-making is one of the key behaviors that distinguished our human ancestors from other primates. But now, a new study from Emory University suggests that it was not the act of tool-making that set hominins apart, but that it was the act of making tools smaller.

“It’s a need that we’ve been perennially faced with and driven by,” said study lead author and anthropologist Justin Pargeter. “Miniaturization is the thing that we do.”

The research, which provides the first comprehensive outline of prehistoric tool miniaturization, proposes that miniaturization is a central tendency in hominin technologies that dates back at least 2.6 million years.

“When other apes used stone tools, they chose to go big and stayed in the forests where they evolved,” said study co-author Professor John Shea. “Hominins chose to go small, went everywhere, and transformed otherwise hostile habitats to suit our changing needs.”

The study authors found that small stone flakes used for piercing, cutting, and scraping appeared in the archeological record at sites on every continent. According to Pargeter, these stone flakes were like the disposable razor blades or paperclips of today – easy to make and easily replaced.

As Pargeter explored ideas for a thesis topic, he examined artifacts from a South African site called Boomplaas. He discovered a sliver of crystal quartz that looked like it had been designed using a highly technical method called pressure flaking. “It was diminutive, about the size of a small raisin, and weighed less than half a penny. You could literally blow it off your finger.”

Under a magnifying glass, there was evidence that the tiny piece of quartz had been used for hunting. “It suddenly occurred to me that archeologists may have missed a major component of our stone tool record,” said Pargeter. “In our desire to make ‘big’ discoveries we may have overlooked tiny, but important, details. A whole technology could lay hidden behind our methods, relegated to bags considered waste material.”

Pargeter theorized that the tiny flake could have been hafted, using a plant-based resin, onto a link shaft that would fit onto a light arrow shaft.

“The link shaft goes into the animal, sacrificing the small blade, but the arrow shaft pops out so you can retain this more costly component. Our ancestors were masters of aerodynamics and acted like engineers, rather than what we think of as ‘cave people.’ They built redundancy into their technological systems, allowing them to easily repair their tools and to reduce the impact of errors.”

“The hands of other primates are not evolved for repeated fine manipulation in high-force tasks,” explained Pargeter. “We’ve evolved a unique precision grip that ratchets up our ability for miniaturized technology.”

Dietrich Stout is the director of the Paleolithic Technology Laboratory at Emory University. He described how Pargeter’s work adds another dimension to the investigation of human evolution. “He’s exploring what may have led to the compulsion to produce these tiny instruments – essentially the relationship between the tools and the human body, brain and the probable uses of the tools,” said Stout.

The study is published in the journal Evolutionary Anthropology.