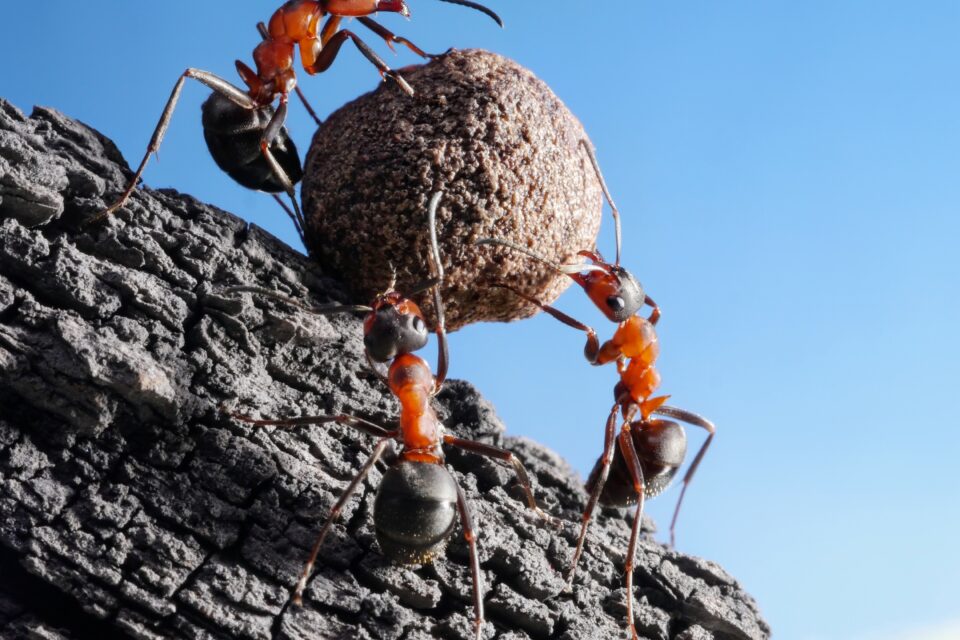 Amber is formed when plant resin fossilizes, and sometimes this process preserves evidence of small animals that were trapped in the sticky substance as it oozed out of the plant, millions of years ago. In the past, most ants captured in amber have come from the northern hemisphere, giving rise to the assumption that ants evolved originally in North America or South Asia. But now scientists have analyzed and described an extinct ant species that is new to science and that was trapped in amber of African origin.

The amber that was found in northwest Ethiopia is estimated to date from the early Miocene, and is between 16 and 23 million years old.  Among the organisms trapped inside are 13 ants of a previously unknown extinct species. Using the X-ray light source PETRA III at the German Electron Synchrotron (DESY) in Hamburg, researchers led by Friedrich Schiller University Jena examined these fossil remains and have now named and described the insect, which represents a brand new genus and species.

The name given to the new species and genus is †Desyopone hereon gen. et sp. nov. With this name, the scientists honor the two research institutions involved – DESY and Hereon – that contributed significantly to this find with the help of modern imaging techniques. Ultimately, it was only possible to identify the new species and genus through the combination of extensive phenotype data from scans, and recent findings from genome analyses of living ants.

Initially, the anatomical structures of the preserved ants led the scientists to place them in the subfamily known as Aneuretinae. This group currently consists mostly of extinct ants known only from fossils, although there is one living species that is found in Sri Lanka. However, after detailed and high-resolution images were obtained using synchrotron micro-computed tomography (micro-CT) scanning, the researchers revised their identification and decided the new species was more appropriately placed in the ant subfamily Ponerinae.

“The complex waist segment and the large but rudimentary mandibles – the mouthparts – are more familiar to us from the Ponerinae, a dominant group of predatory ants,” said Brendon Boudinot, who is currently working at the University of Jena on a Humboldt Research Fellowship. “For this reason, we’ve assigned the new species and genus to this subfamily, even though it has a unique appearance, as the long waist and otherwise unconstricted abdomen are more reminiscent of the Aneuretinae.”

According to the research report, published in the journal Insects, this piece of amber is exceptional in several ways. “The piece with these ants is from the only amber deposit in Africa, so far, that has featured fossil organisms in inclusions. Altogether, there are only a few fossil insects from this continent,” explained Vincent Perrichot from the University of Rennes. “Although amber has long been used as jewelry by locals in the region, its scientific significance has only become clear to researchers in the last 10 years or so.”

It was a complicated process to date the amber, and thereby the fossils enclosed within. Initial dating techniques gave an age of 95 million years, but this was revised to between 16 and 23 million years by determining the age of the fossil pollen and spores captured in the amber alongside the ants. According to Perrichot, “The specimen therefore offers what is currently a unique insight into an ancient forest ecosystem in Africa.”

The present research results also contribute to putting male ants more under the spotlight of evolutionary research. “Because they have such a different body shape compared to the worker ants, all of whom are female, research has neglected them for a long time. This is because males are simply too often overlooked because they cannot be properly classified,” said Boudinot.

“Our results not only update the literature on identifying male ants, but also show that by understanding male-specific features, such as the sex-specific shape of the mandible, we can learn more about the evolutionary patterns of female ants.” This is because in the present study, the researchers have identified a fundamental pattern that occurs in all ants, namely that male and female mandibles follow the same developmental pattern in most species, even if they look very different.

The analysis of these extinct and ancient ants was only possible with the use of state-of-the-art technology. Images of the external and internal anatomy of the ants were obtained using high-resolution imaging techniques, such as micro-CT, in which X-rays are used to look through all layers of the preserved ant bodies. This was particularly important as the genetic material of the ants could not be analyzed due to the fact that their bodies were embedded in rock-hard amber.

“Since the ants enclosed in amber that are to be examined are very small and only show a very weak contrast in classical CT, we carried out the CT at our measuring station, which specializes in such micro-tomography,” explained Jörg Hammel from the Helmholtz-Zentrum Hereon. “This provided the researchers with a stack of images that basically showed the sample that was being studied, slice by slice.”

Put together, these layered images produced detailed three-dimensional images of the internal structure of the animals, which the researchers could use to reconstruct the anatomy with precision. In this way, modern technology helped the researchers to look back into the distant past and identify the details that ultimately led to the identification of the new species and its genus.