New aquatic mice have long feet to wade in rivers and streams • Earth.com 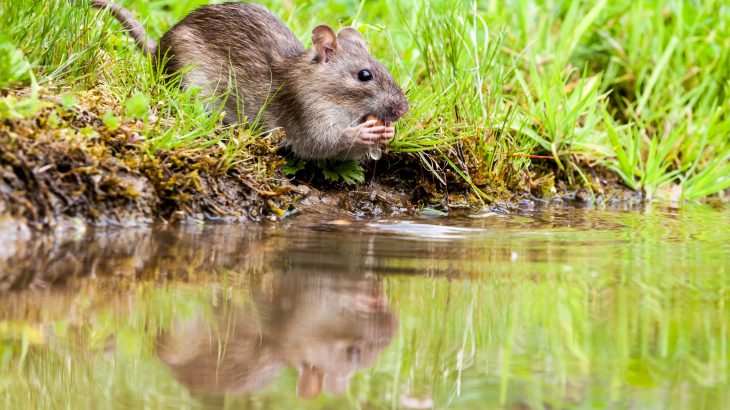 Nearly a century ago, scientists discovered an aquatic mouse in a stream in Ethiopia with water-resistant fur and broad feet for wading in the water. No one has ever found another mouse belonging to this species, which is now thought to be extinct.

However, in a new study, scientists have identified close relatives of the mysterious mouse, including two previously unknown species.

Study co-author Julian Kerbis Peterhans is a researcher at the Field Museum who has studied the rodents for more than three decades.

“These two groups of mice have been confused with one another for a century,” said Peterhans. “They’ve been so elusive for so long, they’re some of the rarest animals in the world, so it’s exciting to finally figure out their family tree.”

The genus represented by the single specimen collected in Ethiopia is known as Nilopegamys. The relatives of Nilopegamys, which are rare animals found in the Congo Basin and western Africa, belong to the genus Colomys. The name Colomys roughly translates to “stilt mouse” because of its elongated feet for wading and foraging in shallow streams.

“These mice are long-footed, kind of like a kangaroo. They sit up on their haunches, and they wade through shallow streams with their whiskers on the water’s surface detecting movements, like sonar,” said Peterhans.

“When I caught my first one some 30 years ago, it was the most beautiful African mouse I’d ever seen, it had water repellent fur that’s very thick and lush and warm and cozy. They’re incredibly soft, and they have this remarkable snow-white belly.”

The mice prefer shallow streams where they can use their whiskers to help them hunt, but they are also found in rivers and swamps.

“To cross one of the rivers where I caught a Colomys, you have to use walking sticks, the water’s up to your waist,” said study co-author Terry Demos. “And you can have torrential rain in the tropics, so sometimes half the traps get swept away, and you have to go downriver to try to find them.”

The research is the first of its kind to evaluate Colomys throughout its broad range. Drawing from field studies and museum collections, the team compared the physical traits of the mice and conducted DNA testing.

The analysis revealed that within the Colomys genus, there were two new species that had not yet been described, which are now known as Colomys lumumbai and C. wologizi.

“The new species we named are part of a global effort to understand the biodiversity of African rainforests and highlight the critical areas to be preserved,” said Demos. “There are vast areas of the Congo Basin that have barely been explored in the last seventy years, places that are hard to access due to political instability. We’re not even completely sure how these animals are distributed, there are big gaps.”

Study lead author Professor Tom Giarla managed to extract DNA from a piece of dried tissue on the skull of the 93-year-old specimen, which ultimately revealed that Nilopegamys is the closest known relative of Colomys.

“It’s underappreciated how little is known about the biodiversity of small mammals, especially in tropical parts of the world. We’re not discovering a whole lot of new lions, tigers, and bears, but there’s an incredible potential for discovery of new species of small mammals because they’re tough to find,” said Professor Giarla.

“And they’re sort of underappreciated animals – they’re really cool when you start to learn about their ecology. These are semi-aquatic mice, so they’re not just your average, everyday rodents.”