New insights into relationship between agriculture and dead zones • Earth.com 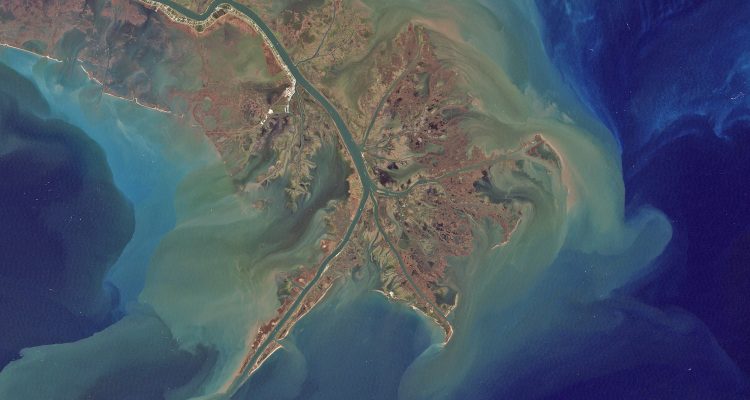 New insights into relationship between agriculture and dead zones

Byadmin
Earth.com staff writer
A study published today in Ecology Letters adds to a growing body of work examining the relationship between harmful algal blooms in the Gulf of Mexico and agricultural runoff. The article focuses on water chemistry, specifically the ratio of dissolved silica to dissolved inorganic nitrogen in 130 lakes connected to watersheds influencing nutrient concentrations in the Gulf of Mexico.
The research is particularly timely as algae, agriculture and weather combined to create an above-average size “Dead Zone” in the Gulf in 2016. Starting at the mouth of the Mississippi River, the ratio of silica to inorganic nitrogen has shifted dramatically toward nitrogen in the last century in the Gulf of Mexico. Two possible explanations for the change in ratio are that dams and reservoirs may remove silica and that agriculture supplies so much nitrogen that the ratios are forced downward. This study shows that reservoirs do not remove silica whereas nitrogen increases greatly when landscapes are more than 60 percent agriculture.

Excess dissolved nitrogen, in coastal zones like the Gulf of Mexico and Lake Erie, fuels the growth of algae which in turn precipitates anoxic conditions, or dead zones. Prior to such nutrient loading, the ratio of dissolved silica to dissolved inorganic nitrogen was balanced in a way that allowed diatoms, which supply the oxygen in every fourth breath a person takes, to survive.

“It is easy to change a phytoplankton community just by altering the availability of a few important compounds such as dissolved silica or dissolved inorganic nitrogen,” said co-author John Downing, director of the University of Minnesota Sea Grant College Program and the study’s principal investigator. “In the Gulf we want to see diatoms, a type of phytoplankton that needs about equal amounts of dissolved silica and dissolved inorganic nitrogen. What we’ve created is a nitrate-rich condition that favors other, harmful types of phytoplankton.”

Downing and colleagues from the University of Washington and Boston University found that increased nitrogen loss from agricultural fields sufficiently explains why the northern Gulf of Mexico waters are plagued by blooms of harmful algae. They also identified methods that may lead to better techniques for managing landscapes and the water they influence.

Downing and colleagues suggest that managing landscapes at watershed levels could significantly improve water quality, especially in wet years. They also point to reservoirs and similar water impoundments as areas where heavy nutrient loads could be diminished without affecting silica concentrations before the water reaches the Gulf of Mexico.

“We need to be vigilant about our land use and water quality,” said Downing. “Climate change and increased storminess will likely exacerbate the skewed ratios we found and the extent of harmful blooms in coastal areas if we don’t manage agricultural runoff more effectively. Harmful algae blooms cost the U.S. seafood, tourism and health industries over $80 million a year according the National Oceanic and Atmospheric Administration, and we know we can do better.”