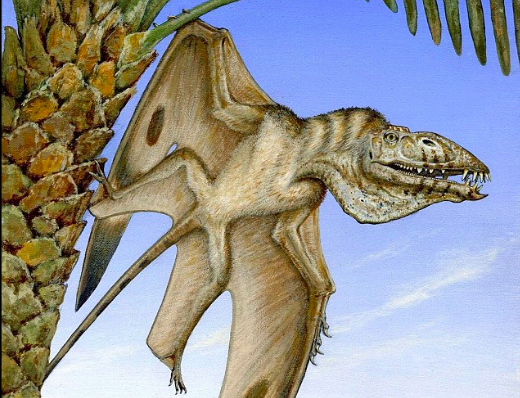 The remains of a new species of pterodactyl from 200 million years ago have been discovered in the desert of Utah. With vampire-like fangs and a wingspan of about five feet, the creature was the largest-known early pterodactyl species.

The flying reptile was named Caelestiventus hanseni, which is Latin for “heavenly wind.” C. hanseni existed by a lake in modern-day Utah during the Triassic Period between 201 and 210 million years ago, when North America was much hotter than it is today.

Prior to this discovery, the other known pterodactyl specimens of this time frame were all recovered in regions such as Greenland and the UK. The new fossil provides evidence that pterodactyls were widely distributed across the planet.

Professor Brooks Britt is the lead author of the study and a paleontologist from Brigham Young University in Utah.

“In the latest Triassic, this area of North America was more arid and hot than it is today, indicating C. hanseni could cope with extreme desert conditions,” said Professor Britt.

Pterodactyls were a very successful and dominant species for over 160 million years, surviving a mass extinction around 200 million years ago that wiped out about half of the world’s species. Also known as pterosaurs, these extinct flying creatures were the first vertebrates to evolve the ability to fly.

C. hanseni is thought to be one of the largest Triassic pterosaurs, and quite possibly the largest, based on the length of its skull and its wing span. Some pterosaurs that followed had wingspans of up to 35 feet, while others were as small as a sparrow.