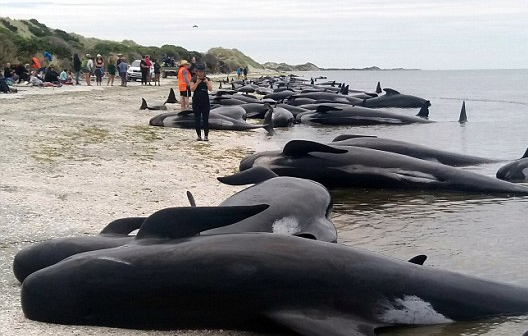 A horrible scene is unfolding on a remote New Zealand beach: 400 pilot whales have stranded themselves for reasons unknown to experts.

As rescuers are frantically working to save them, the whale rescue organization Project Jonah reports that over 300 of the creatures have died. In a Facebook post on Friday, the organization said that rescue efforts will focus on “refloating” the 100 surviving whales as soon as the tide comes in.

When the mass beaching was discovered, conservationists sounded the alarm, asking volunteers to help save the distressed marine mammals. People from around the country – including a team of approximately 30 trained whale medics – traveled to Farewell Spit, a beach on New Zealand’s South Island.

Volunteers formed a human chain and worked to keep the whales hydrated and alive while waiting for high tide. Once the water moves back in, stranded whales can be “floated” back into the water so that they may swim away. Dragging a beached whale back into the water can seriously injure it, so rescuers have had to be diligent and very patient.

The stranding on the beach in Golden Bay is the largest incident of its type in recent years. The largest whale stranding on record happened in 1918. Then, 1,000 whales beached themselves on the Chatham Islands in New Zealand.

The last mass whale stranding in New Zealand happened in 2015. Then, nearly 200 whales came ashore – and in the exact same area. Farewell Spit has earned a reputation as the country’s most dangerous “whale trap.” In the 2015 stranding, rescuers were able to save nearly 60 of the creatures.

Pilot whales are black or dark grey in color and are the second-largest in the dolphin species after the orca, or killer whale. They are the most frequently stranded whale because they travel in large pods.