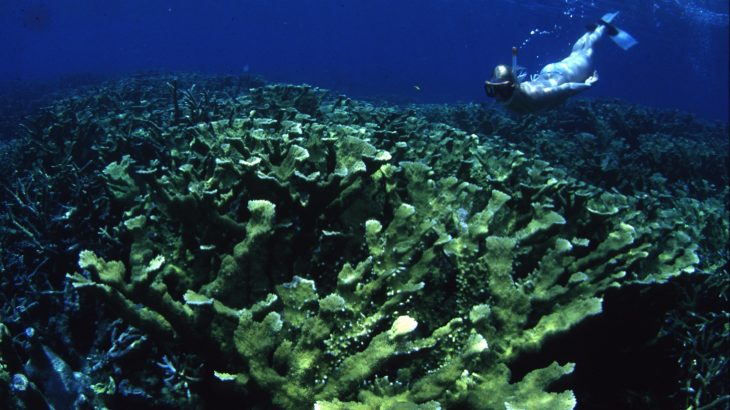 Coral reefs are dying off at an alarming rate with mass bleaching events becoming more and more common.

While many studies have rightly attributed the cause of these bleachings to climate change, increasing ocean temperatures, and ocean acidification, a new study has discovered another root cause of the world’s coral catastrophe.

After reviewing 30 years of unique data from the Lower Florida Keys, researchers from the Harbor Branch Oceanographic Institute at Florida Atlantic University found that increases in nitrogen levels are starving out corals and making them susceptible to bleaching.

“Citing climate change as the exclusive cause of coral reef demise worldwide misses the critical point that water quality plays a role, too,” said James W. Porter, a co-author of the study. “While there is little that communities living near coral reefs can do to stop global warming, there is a lot they can do to reduce nitrogen runoff. Our study shows that the fight to preserve coral reefs requires local, not just global, action.”

Nutrient runoff from fertilizers, topsoil, and improperly treated sewage are adding nitrogen to the environment. This added nitrogen has led to phosphorus starvation in corals which lowers the coral’s threshold for bleaching.

The study, published in the journal Marine Biology, provides one of the longest records to date of nutrient levels and algae concentrations in coral reefs.

“Our results provide compelling evidence that nitrogen loading from the Florida Keys and greater Everglades ecosystem caused by humans, rather than warming temperatures, is the primary driver of coral reef degradation at Looe Key Sanctuary Preservation Area during our long-term study,” said Brian Lapointe, the senior author of the study.

Nutrient runoff from topsoil and fertilizer have increased the nitrogen to phosphorus ratio in reef algae.

The researchers collected seawater and seaweed samples from the Looe Key Sanctuary Preservation Area during wet and dry seasons and analyzed data from 1984 through 2014.

Coral cover in the sanctuary decreased from 33 percent in 1984 to less than six percent in 2008.

Nutrient levels, salinity, and temperature were also monitored to see how nitrogen made its way downstream from the Everglades to the Florida Keys reefs.

In the early 1990s, a spike in nutrient runoff from the Everglades increased phytoplankton and nitrogen levels in the coral reefs and even though nitrogen levels have decreased, the corals have still not recovered.

This study reveals a root cause of coral bleaching, which can help better manage and conserve coral reefs in the future.

“The future success of the Comprehensive Everglades Restoration Plan will rely on recognizing the hydrological and nitrogen linkages between the Everglades, Florida Bay, and the Florida Keys,” said Lapointe. “The good news is that we can do something about the nitrogen problem such as better sewage treatment, reducing fertilizer inputs, and increasing storage and treatment of stormwater on the Florida mainland.”