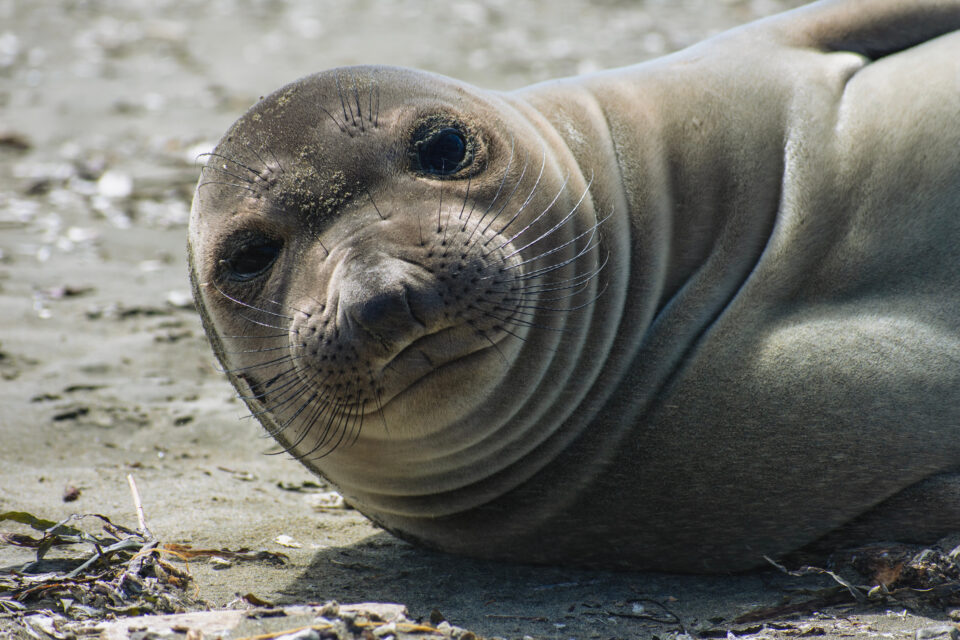 Researchers at UC Santa Cruz have compiled data from four decades to untangle the impacts of environmental conditions, population density, and maternal features on reproductive success among northern elephant seals.

The seals are a successful example of reviving a critically endangered species. In the 1900s, northern elephant seals were hunted to near extinction, but have made an exceptional recovery since the end of commercial sealing.

Every year, thousands of pups are born at the breeding colony at Año Nuevo Reserve, which is part of the UC Natural Reserve System. Since the 1960s, the long-running elephant seal research program at UC Santa Cruz has been investigating this particular colony, producing a wealth of information.

The program, which was started by Professor Emeritus Burney Le Boeuf, has advanced under the leadership of Professor Daniel Costa. The current investigation was focused on the weight of the pups during weaning (weaning mass), as higher weaning mass increases the survival prospects of the pup.

According to study lead author Rachel Holser, the research team assumed that major oceanographic events would have a significant influence on the abundance and distribution of the seals, and were surprised to learn that other factors were more significant.

Holser explained that the impact of ocean conditions such as El Niño events, the Pacific Decadal Oscillation, and marine heatwaves on the weaning mass is relatively low compared to other factors. “It’s not that it doesn’t play a role, but it’s not nearly as important as those onshore conditions – who your mother is and how dense the colony is.”

“During a major El Niño, you can see almost complete reproductive failure in some years for species like sea lions, With elephant seals, we don’t see that kind of boom and bust effect. Even in a poor year, they manage to be pretty successful,” said Holser.

However, she emphasized that the effects of ocean conditions on elephant seals can be evident in other indices of population health besides weaning mass. During bad years, some females choose to skip reproducing completely to improve their body conditions. There could also be a decrease in adult female survival rates.

Holser noted that the age of the mother is a significant factor due to numerous reasons. At the beginning of lactation, older females produce milk with a higher fat content than younger ones.

The mother’s experience is also very important as females with more experience are able to select a good location on the beach for raising their pup, defend the young ones, prevent the pup from getting lost and exhausting its energy.

Contrary to the general assumption that a larger female will bear larger puppies, Holser said that the mother’s age is more important than her size. “There’s a lot of variability in size, and the data show that what’s really important is the experience of having been through multiple reproductive cycles.”

“Previous work has shown that ocean conditions impact the ability of the mother to invest in her young, but this study shows that age and, more importantly, experience can compensate for those environmental changes,” said study co-author Daniel Costa.

Raising the pup becomes tougher when more and more animals are crowded together on the beach.

“When the colony becomes more dense, there are more interactions – sometimes the females are fighting, or the males will cause a disturbance – and pups end up getting lost and wasting energy trying to find their mother,” Holser said.

“When she gives birth to this tiny pup, it’s got four weeks to put on as much fat as it can, which means it needs to spend as much time as possible nursing and resting.”

The northern elephant seals’ reproductive approach is partly responsible for their adaptability to shifting environmental conditions. Female elephant seals spend months at sea feeding and gaining weight before returning to the colony to give birth, covering great distances across the North Pacific Ocean. They do not leave the beach to feed while nursing their pup, relying instead on the stored energy gained during the foraging journey.

Other species, such as the California sea lion, rely on regular feeding forays while nursing their pups, so a shift in weather that makes hunting difficult can be disastrous.

“This study was only possible because of the work of hundreds of people who have been taking these measurements for over 40 years,” said Holser.