Scientists have new plan to save northern white rhinos • Earth.com 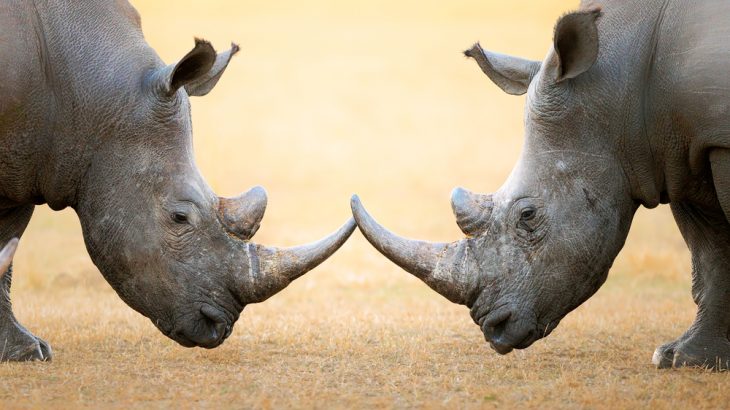 Scientists have new plan to save northern white rhinos

After decades of poaching, northern white rhinos are on the brink of extinction. When the last male of the species died earlier this year, it seemed like a death knell. Only two females remain.

An ambitious new idea may save them.

While studying genetic samples from 232 rhinos, researchers at Cardiff University and the University of Venda found that populations of northern and southern white rhinos have interbred as recently as 14,000 years ago. Previously, biologists thought the two species – which split more than 1 million years ago – could not breed.

“We’ve been able to establish that there was contact between northern and southern rhino populations throughout history,” Dr. Isa-Rita Russo of Cardiff University told the Daily Mail. “This is an exciting find – genetic proof of contact between the populations suggests it may be possible to successfully rescue the northern white rhinoceros.”

In the wake of the discovery, the scientists are looking into creating embryos using both northern and southern white rhino DNA for in vitro fertilization.

Because the only two surviving northern white rhinos are not likely to live long enough to see the technique perfected, the embryos would be implanted in southern white rhino females.

Both northern and southern populations of the white rhinoceros have seen historical declines. However, the southern species is now the largest rhinoceros population on Earth; numbers of northern white rhinos have declined rapidly since the 1970s.

“It appears that the white rhinoceros is no stranger to low genetic diversity,” Dr. Yeshan Moodley of the University of Venda said. “Our results show that the species was subjected to several climatically and anthropogenically driven population declines, which would have reduced and compressed genetic diversity in the past.”

The study has been published in the journal Proceedings of the Royal Society B. Scientists are seeking donations through GoFundMe to help support their research into white rhinos and IVF.