The oldest ice on Earth could reveal key insight into climate change • Earth.com 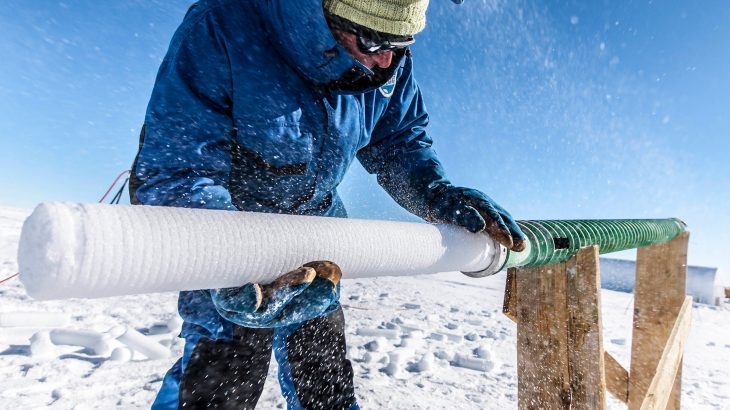 An international team of researchers is working to obtain Antarctic ice cores that hold a historical record of the climate over the past 1.5 million years. After searching for three years to find the ideal site, the scientists have selected “Little Dome C,” one of the coldest and most lifeless places on Earth.

The project, known as Beyond EPICA – Oldest Ice (BE-OI), is being led by Olaf Eisen from the Alfred Wegener Institute (AWI) Helmholtz Centre for Polar and Marine Research.

Little Dome C is a three hour drive by snowmobile from the Concordia Antarctic station, which is a site where researchers previously drilled more than 3,000 meters deep. The analysis of the resulting ice cores produced a climate record that dates back  800,000 years.

“During that time, there were alternating periods: long glacials and shorter interglacials, at an interval of roughly every hundred thousand years,” explained Eisen.

The experts do not yet have any ice cores from the time period when the alternating  rhythm between cold and warmer intervals changed significantly.

“More than 1.2 million years ago, the cycles were only roughly 40,000 years long, and were set off by regular changes in the angle of the Earth’s axis,” explained Eisen. “This was followed by a transitional period of roughly 300,000 years, before the hundred-thousand-year rhythm began, roughly 900,000 years ago.”

Testing the air bubbles trapped in the ice is the only way for scientists to gather data on carbon dioxide and methane, as well as their impact on the climate. “Accordingly, after having gathered the 800,000-year-old EPICA samples, there are very good reasons for drilling into ice that’s at least 1.5 million years old,” explained Eisen.

This would give the scientists a better understanding of the environmental  conditions during the “mid-Pleistocene transition” and the 40,000-year rhythm that preceded it.

If the European Union approves the second phase of BE-OI, the drilling at Little Dome C will begin in November of 2021. The drilling will continue over three Antarctic summers until a depth of 2,730 meters is reached, where the ice should be at least 1.5 million years old.

The BE-OI presented its findings at the General Assembly of the European Geosciences Union in Vienna.