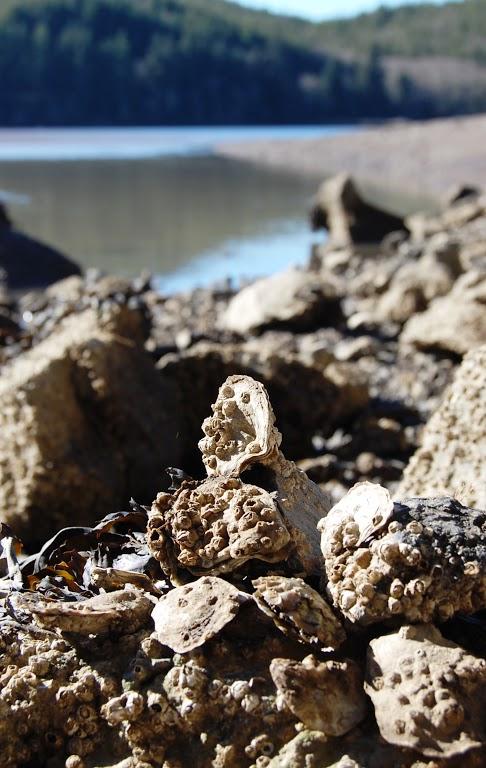 Native Olympia oysters, which once thrived along the Pacific Northwest coast until over-harvesting and habitat loss all but wiped them out, have a built-in resistance to ocean acidification during a key shell-building phase after spawning, according to a newly published study.

Unlike the commercially raised Pacific oysters, Olympia oysters don’t begin making their shells until 2-3 days after fertilization and make them far more slowly, which helps protect them from corrosive water during this critical development phase, said Oregon State University’s George Waldbusser, principal investigator on the project.

Pacific oysters, on the other hand, only have a six-hour window to develop their calcium carbonate shell, and when exposed to acidified water, their energy stores become depleted. The larval oysters may get through the shell-building stage, Waldbusser said, but they often will not have enough energy to survive.

Results of the study are being published this week in the Journal of Limnology and Oceanography.

“This is a unique trait that allows native oysters to survive surprisingly high levels of acidification,” said Waldbusser, a marine ecologist in OSU’s College of Earth, Ocean, and Atmospheric Sciences. “But they didn’t develop that trait in response to rising acidification. It has been there for some time. It does make you wonder if there may be traits in other organisms that we’re unaware of that may be beneficial.”

In their study, which was funded by the National Science Foundation, the OSU researchers measured the calcification rates of both Olympia and Pacific oysters for five days after spawning, taking measurements every three hours. Although other studies have looked at the effects of acidified water on adult oysters, this is the first time researchers have been able to pinpoint its effect on larval oysters in the shell-building stage.

What they found was a seven-fold difference in the calcification rate. Pacific oysters put all of their energy into rapidly developing a shell, but the price of that investment is huge.

Native Olympia oysters developed their shells much more slowly, but seemingly at a lower cost.

“Pacific oysters churn out tens of millions of eggs, and those eggs are much smaller than those of native oysters even though they eventually become much larger as adults,” Waldbusser said. “Pacific oysters have less energy invested in each offspring. Olympia oysters have more of an initial energy investment from Mom, and can spend more time developing their shells and dealing with acidified water.”

The OSU researchers found that relative energy stores of young Pacific oysters declined by 38.6 percent an hour, and only 0.9 percent in Olympia oysters.

The study noted other interesting differences between Pacific and Olympia oysters. Native Olympia oyster larvae develop in a brood chamber, where the embryos take longer to develop. However, these brood chambers don’t necessarily protect the young oysters from acidified water, since water is continually pumped through the chamber.

To test how the oysters would do when raised like Pacific oysters — outside the chamber — the researchers conducted an experiment raising the larval Olympia oysters outside their brood chamber and exposing them to acidified water.

“Brooding was thought to provide several advantages to developing young, but we found it does not provide any physiological advantage to the larvae,” said Matthew Gray, a former doctoral student in OSU’s Department of Fisheries and Wildlife and now a post-doctoral researcher at the University of Maine. “They did just as well outside the brood chamber as inside.

“Brooding does help guard the larvae from predators and some adverse environmental changes — such as low-salinity events — but it plays no role in protecting native oysters against acidification.”

The research highlights this robust response to ocean acidification at this critical life-history stage of Olympia oyster larvae, a period which has not previously been studied. Past studies conducted by Annaliese Hettinger, a post-doctoral researcher in Waldbusser’s lab, found that the Olympia oyster larvae are sensitive to acidification in the later swimming stage, and those effects can carry over to adult stages.

The current research may, however, have implications for the future of the commercial oyster industry, given that many of the problems seem to originate at this very early developmental stage. Cultivation of native oysters could help guard against catastrophic Pacific oyster losses due to acidification, the researchers say, or it may be possible to breed some of the Olympia oysters’ beneficial traits into Pacific oysters – either slowing the calcification rate of early larvae or producing fewer and bigger eggs.

The Olympia oyster, which is smaller than the commercially grown Pacific oyster, is prized for its distinctive flavor. Originally, Olympia oysters grew from Baja California to Vancouver Island, and are found sparingly in three Oregon bays — Yaquina, Netarts and Coos Bay. During the height of these harvests in the 1890s, some 130,000 bushels of oysters were annually shipped from the Pacific Northwest to California and within 20 years, 90 percent of these native oysters had disappeared.

Researchers speculate that the remaining Olympia oyster populations may have succumbed to increased silt generated by 20th-century logging and mill operations, which either killed them outright or covered their beds and destroyed their habitat. They have not returned in discernible numbers to Oregon estuaries.

Editor’s note: The study this story is based on is available online: http://bit. ly/ 1UjsaD8