Newly identified orangutan species is on the brink of extinction • Earth.com 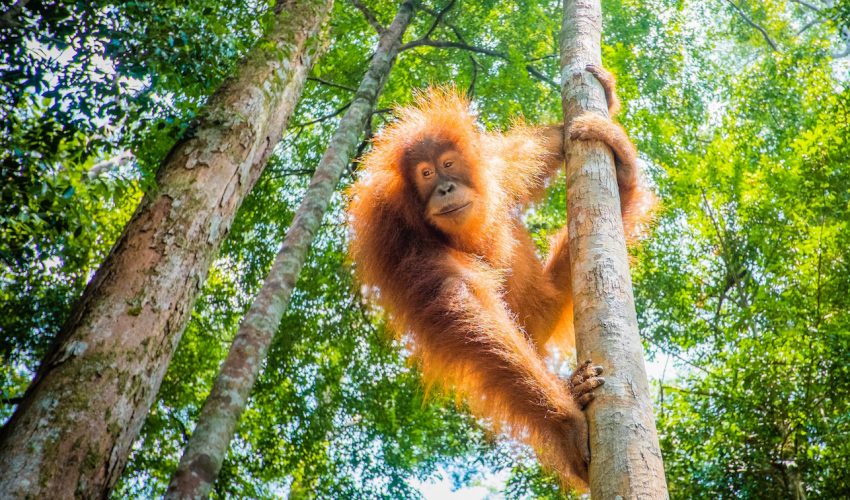 Newly identified orangutan species is on the brink of extinction

Scientists have identified a new species of great ape in Sumatra. The isolated population of orangutans, named Tapanuli orangutans, may have been discovered just in time, as researchers have determined they are among the most threatened great apes in the world.

According to the researchers, there are only about 800 Tapanuli orangutans left. Those that remain are threatened by hunting and loss of habitat. The new orangutan species lives in the Batang Toru area in North Sumatra, Indonesia.

Tapanuli orangutans, the seventh known species of great apes, were first spotted in 1997. While there had been rumored sightings prior to this, these orangutans lived south of the known range of Sumatran orangutans.

Previous studies indicated that this group of orangutans in the Batang Toru area varied both genetically and behaviorally from the Sumatran orangutans, but there was insufficient evidence to designate a new species. In 2013, a research team accessed the skeleton of a Batang Toru orangutan and found discrepancies in the individual’s skull and teeth.

For the recent study, scientists conducted a sophisticated analysis of 37 orangutan genomes. The research showed that earliest split among living orangutan species happened over three million years ago, between the Batang Toru population and Bornean orangutans. But the Sumatran orangutans did not split from the Borneans until much more recently, around 700,000 years ago, according to the analysis.

“It isn’t an everyday event that we find a new species of great ape, so indeed the discovery is very exciting,” said senior author Michael Krutzen of the University of Zurich.

“Great apes are among the best-studied species in the world,” added co-author Erik Meijaard. “If after 200 years of serious biological research we can still find new species in this group, what does it tell us about all the other stuff that we are overlooking: hidden species, unknown ecological relationships, critical thresholds we shouldn’t cross? Humans are conducting a vast global experiment, but we have near-zero understanding of what impacts this really has, and how it could ultimately undermine our own survival.”

The Tapanuli orangutans are already severely threatened by hunting, and a hydroelectric dam has been proposed that would flood large parts of their remaining habitat if implemented. Assessments of the new species suggest that a mortality rate of less than one percent per year would still be enough to wipe out the Tapanuli orangutans.

The researchers say it is important to work with Indonesian authorities and wildlife organizations to gain urgent support for more effective conservation measures to protect the Batang Toru area. The study is published in Current Biology.