Vocal abilities of orangutans may help unravel the mysteries of human speech • Earth.com 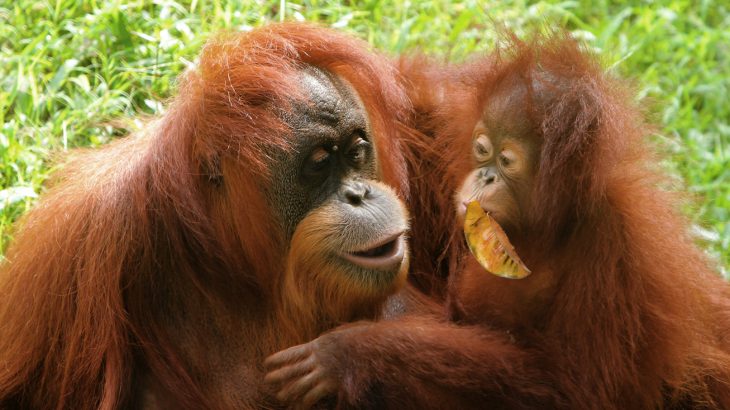 In a new study, researchers have found that two adult orangutans were able to play a kazoo within just minutes of being introduced to the instrument. The study demonstrated that orangutans can control their voice in a way that is very similar to humans, and this finding may ultimately improve our understanding of how human speech evolved.

Scientists at the University of St. Andrews collaborated on the project with a team of experts at the Indianapolis Zoo, which has one of the largest populations of orangutans in the country. The study was focused on an 11-year-old named Rocky and a 36-year-old named Knobi.

The orangutans were given a basic instrument known as a membranophone, which produces music when vocalizations vibrate a stretched membrane. The animals used their kazoos with voluntarily control over their vocal production.

The team observed as Rocky and Knobi learned to play their instruments, on some level, within a few minutes. The researchers found that the voice control used by apes varies from that of humans in its magnitude, but is otherwise very similar.

“This important study redefines our understanding of how spoken language may have evolved,” said Dr. Rob Shumaker, who is the president of the Indianapolis Zoo. “It also demonstrates that the abilities of orangutans, and likely all great apes, have been greatly underestimated.”

“This new knowledge compels us to have a stronger conservation ethic at a time when all wild great ape populations face serious threats to their survival.”