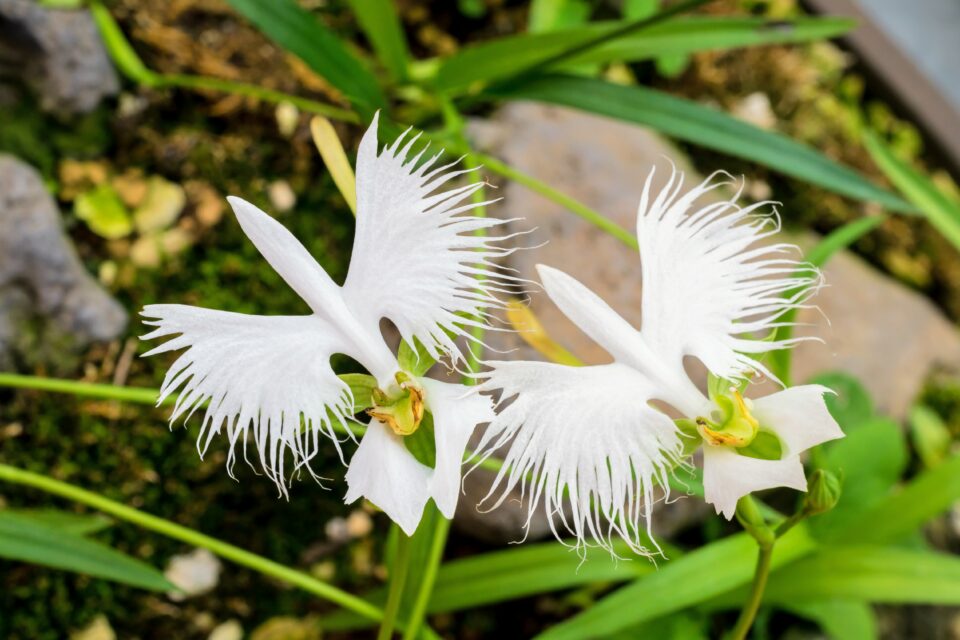 The wild orchid Habenaria radiata’s beautiful white petals resemble a white egret in flight – hence the flower’s colloquial name of “white egret orchid.” Although this orchid has been loved by people since ancient times, the adaptive significance of the flower’s jagged shaped has remained a mystery until recently.

For three years, a team of researchers led by Kobe University in Japan has conducted field experiments in which the feather-like fringe was removed, and the ways in which this change influenced the orchid’s pollinators was examined. The experts discovered that, in their natural habitat, white egret orchids without this fringe tended to produce fewer healthy seeds than intact plants. The question that remained was why.

Initially, scientists thought that orchids’ petals mainly function as visual attractants. In the case of H. radiata, hawkmoths – this species’ primary pollinators – were observed hovering in the air while drinking nectar from flowers, making researchers hypothesize that they are visually attracted by the plant’s fringe.

Since the flowers of other plants pollinated by hawkmoths (such as snake gourd) also have deeply divided fringed petals, it was believed that these petals have adapted to effectively attract hawkmoths, most likely because fringed flowers can conserve more resources than fringeless ones of the same diameter.

However, if the fringe functions mainly as a visual attractant, it can be predicted that specimens with their fringes removed would have a reduced fruit production rate (since fruit production is an indicator of the frequency of pollinator visits).

The scientists were surprised to find that, contrary to this prediction, there was no decline in fruit production in fringeless specimens, suggesting that the fringe does not in fact play a significant role in attracting hawkmoths. Nevertheless, flowers with the fringe removed had a lower rate of healthy seeds in their fruit.

By conducting detailed behavioral observations of the hawkmoths, scientists noticed that this major pollinator does not hover continuously while drinking nectar, but sometimes grasps onto the petal fringe with its mid-legs. This suggests that, without the stability provided by the fringe, the hawkmoths cannot pass as much pollen to the plant, resulting in fringeless plants receiving fewer pollen grains per visit and producing fewer healthy seeds.

“The white egret orchid was given its name because its brilliant white petals resemble the bird in flight. According to legend, the soul of a white egret that died was reborn as the much-loved white egret orchid,” said study lead author Kenji Suetsugu, an associate professor of Botany at Kobe University.

“Nevertheless, it is now evident that fringes primarily stabilize the hawkmoth (the primary pollinator)’s posture, increasing pollen transfer. I am pleased that we have revealed the unexpected adaptive significance that is at the heart of its distinctive fringe,” he concluded.