Heat from the Pacific drove volcanic activity in Yellowstone • Earth.com 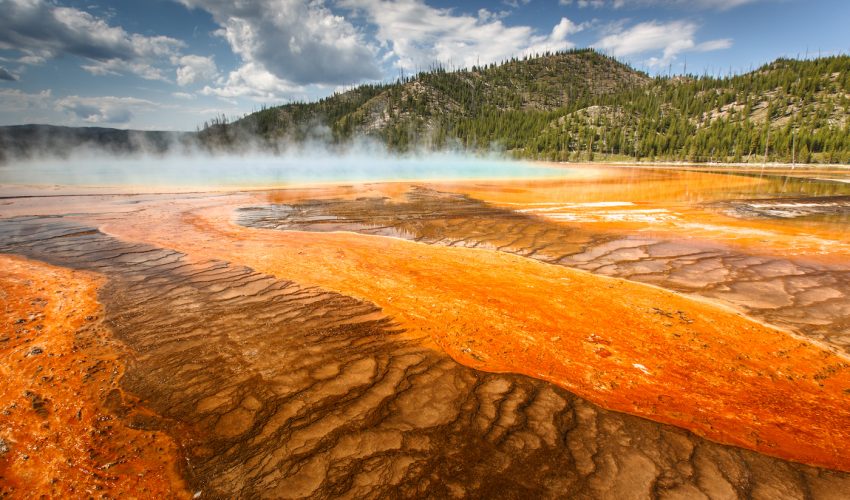 Heat from the Pacific drove volcanic activity in Yellowstone

With growing concerns of a potentially catastrophic volcanic eruption in Yellowstone National Park, researchers from the University of Illinois have closely examined the geological history of the region. Their investigation into the subsurface land of Yellowstone reveals that volcanic activity in this area is far more complex than previously realized.

“The heat needed to drive volcanism usually occurs in areas where tectonic plates meet and one slab of crust slides, or subducts, under another. However, Yellowstone and other volcanic areas of the inland western U.S. are far away from the active plate boundaries along the west coast,” said lead author Lijun Liu. “In these inland cases, a deep-seated heat source known as a mantle plume is suspected of driving crustal melting and surface volcanism.”

Using a technique called seismic tomography, the research team was able to closely observe the subsurface of the western United States, which enabled them to assemble the geologic history that drove volcanic activity in the region.

The geologists used supercomputers to simulate various tectonic scenarios in order to explore the range of possible geologic histories of this region over the past 20 million years. The results of their analysis do not support the traditional mantle plume theory.

“It appears that the mantle plume under the western U.S. is sinking deeper into the earth through time, which seems counterintuitive,” said Liu. “This suggests that something closer to the surface – an oceanic slab originating from the western tectonic boundary – is interfering with the rise of the plume.”

The mantle plume concept has been heavily debated for many years, and the findings of this study indicate the need for a revised tectonic scenario, according to the researchers.

“A robust result from these models is that the heat source behind the extensive inland volcanism actually originated from the shallow oceanic mantle to the west of the Pacific Northwest coast,” said Liu. “This directly challenges the traditional view that most of the heat came from the plume below Yellowstone.”

While the experts are not predicting a violent eruption in Yellowstone National Park, they explain that the conditions have not changed significantly enough to rule one out.

“Of course, our model can’t predict specific future super-eruptions,” said Liu. “However, looking back through 20 million years of history, we do not see anything that makes the present-day Yellowstone region particularly special – at least not enough to make us suspect that it may do something different from the past when many catastrophic eruptions have occurred.”

“More importantly, this work will give us a better understanding of some of the mysterious processes deep within the earth, which will help us better understand the consequences of plate tectonics, including the mechanism of earthquakes and volcanoes.”

The study is published in the journal Nature Geosciences.