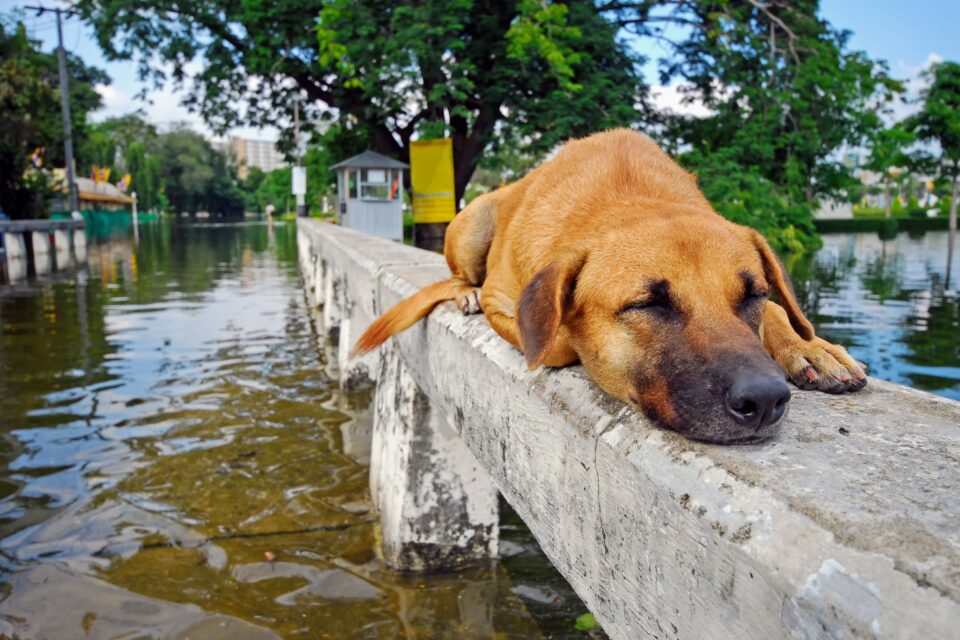 Disasters such as wildfires, hurricanes, floods and droughts, are set to increase in frequency in future as the world’s climate changes. Such events are devastating to the communities they strike, bringing both financial and health-related impacts that can have long-term consequences for people. Today, most U.S. jurisdictions have a local emergency management team to develop suitable responses to natural disasters, which may include evacuation, shelters, financial and food aid and relocation efforts for affected individuals and their families.

Strikingly, however, very few of these response plans take into account the needs of companion animals, such as dogs and cats that are also victims of environmental disasters. Most households in the U.S. own pets in the form of dogs or cats and yet very little accommodation is made for the needs of these animals in the event of disasters. Although animal shelters and rescues are involved in disaster preparedness in most counties, and provide harm-reduction services such as microchipping and vaccine clinics, there is still a disconnect between animal and human disaster planning.

Data for the study was obtained from the Shelter Animals Count (SAC), and the Federal Emergency Management Agency (FEMA), which documents 272 fires, and 72 hurricanes between 2013 and 2018. The final, combined data set included 83,910 observations for dogs and 70, 538 observations for cats. In addition to data on shelter occupancy at rescue facilities, the researchers also considered the numbers of animals euthanized at these facilities after environmental disasters.

The results of the analysis, published in the journal PLOS Climate, show that the demand for shelter services varied depending on the type of disaster event (fire or hurricane) and on the species of pet.

“We found significant changes in the demand for animal care services in both the immediate and long-term aftermath of the disaster events we evaluated. These changes vary based across cats and dogs, hurricanes and fires, and the type of animal care facility,” said the study authors.

In the case of dogs, there was an increased demand for housing within animal care facilities in the time periods following hurricanes, even after a year had elapsed since the disaster. However, this was not the case after fires, indicating that fires and hurricanes may affect dog interaction with animal care facilities differently. The experts hypothesize that the increase in dog intakes observed in the month and year following a hurricane may be due to the large influx of stray animals that typically occurs after the disaster, as residents move away from the area. The analysis did not indicate that fires and hurricanes result in more dogs having to be euthanized.

Cats appear to need housing in animal shelters particularly in the month of a disaster event. More animal shelter organizations reported higher numbers of cats the month of a fire compared with the month after. More organizations also reported higher cat euthanasia rates the month and year after a fire, though this action is only taken as a last resort, if facilities feel that no owner is searching for the pet. Cats may become burned or injured during a fire and this may lead to the increased need for euthanasia.

According to the researchers, the “findings suggest companion animals and the facilities that house them are greatly affected by the impacts of climate change, as evidenced by the shifts in demand on animal housing and euthanasia in the periods following a disaster.”

In response to these demands, Rowitt and Brown emphasize that the needs of companion animals should be fully integrated into human disaster management plans. The most effective way for this to happen is via collaboration between local governments, emergency management, animal shelter and rescue organizations, veterinarians, and pet owners themselves, say the researchers. Integrating animal welfare into human disaster planning is important as it has been shown that pet owners are likely to be more resistant to evacuation because of the stress of leaving their animals behind.

For many survivors of disasters, the presence of a beloved pet is integral to their emotional and psychological recovery, making integrated planning for animal and human victims even more important. One survey found that over 63 percent of respondents considered their pet to be an important coping mechanism during stressful situations, so losing a companion animal during a disaster event could lead to increased levels of stress and anxiety.

Although the current study indicates the need for increased housing for dogs in the time period after hurricanes, further research may show that different disaster events have different effects on populations of companion animals. The researchers suggest applying a One Health approach to disaster management strategies, whereby the welfare of companion animals is considered alongside the welfare of humans as we prepare to face the consequences of climate change.

“Given the importance of integrating human and animal disaster plans, combined with the fact that communities are currently experiencing adverse consequences associated with climate change, including extreme temperatures, more frequent and severe storms, drought, and rising sea levels, an organized,” wrote the study authors. “One Health disaster response that addresses human and animal needs is essential for the continued welfare of companion animals and their owners.”